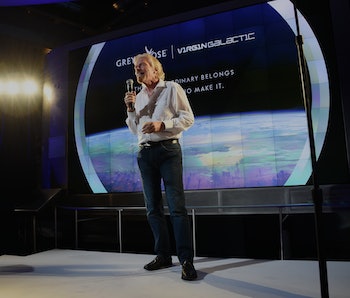 Space tourism company Virgin Galactic hasn’t exactly had the most brilliant track record for success since its founding in 2004. Company founder and chairman, Richard Branson initially wanted to see a crewed maiden flight by 2009. Yet here we are, well into the next decade, and the company has yet to send a single person into space.

Branson hopes to change all of that by the end of next year. In a new interview with The Telegraph, Branson expressed a firm determination to finally send a crew into space sometime in 2018 — and it’s very well possible Branson himself will be a part of that flight.

“The test program is going really well,” he said, “and as long as we’ve got our brave test pilots pushing it to the limit we think that after whatever it is, 12 years of hard work, we’re nearly there.”

Virgin Galactic’s foray into the space industry was nearly permanently derailed by the October 2014 crash of the company’s SpaceShipTwo in California’s Mojave Desert, resulting in the death of one of the aircraft’s two copilots.

The accident was a horrible setback, but the company seems to have learned important lessons moving forward, especially under former NASA chief of staff and current CEO George Whitesides. Safety standards have experienced a robust leap forward, and Virgin Galactic is enjoying a successful new round of testing, having just completing the third glide test of the new version of the SpaceShipTwo, the VSS Unity. The launch of a new manufacturing division, The Spaceship Company, and the addition of Stephen Hawking as a ticket holder for one of the first flights into space are extremely encouraging signs the company is making effective strides.

The company has quite the ways to go before it can send humans up into the sky and guarantee a safe journey back, but with about 500 customers having already put down $250,000 each on a seat to go into space sometime soon, there doesn’t seem to be any turning back from here. If Virgin Galactic really does send people into space next year, it will effectively open the doors to space tourism permanently.