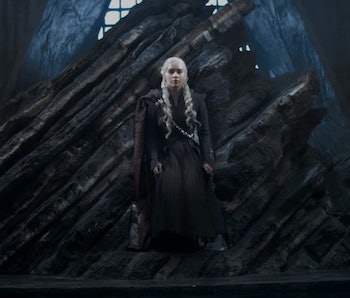 Games of Thrones Season 6 ended with some brutal victories and startling revelations. As Season 7 approaches, the Seven Kingdoms dangle in a place of great uncertainty. Of course, the latest teaser for Season 7 raises more questions than it answers. Most notably, where does it take place?

The teaser focuses on Daenerys Targaryen, Jon Snow, and Cersei Lannister, and it shows each one sitting on a different throne. Cersei is clearly sitting on the Iron Throne at King’s Landing, and we know that Jon is probably at Winterfell. But where is Daenerys?

In the Season 6 finale, the Northern Lords proclaimed Jon King of the North. Bran’s vision confirmed that Jon’s mother is Lyanna Stark, which means that Rhaegar Targaryen is his father, making Daenerys his aunt. Cersei destroyed many of her rivals in the burning of King’s Landing. And Daenerys set sail for Westeros. (There’s also Arya’s revenge on the Freys, but she’s not in the teaser.)

Daenerys’s throne in the latest teaser is unfamiliar, though its probable location is not: All signs point to Dragonstone. Daenerys will likely drop by her family’s ancestral home to gather her forces before she reclaims Westeros for the Targaryens.

Formerly occupied by Stannis before his ill-fated siege on Winterfell, Dragonstone likely stands relatively empty. Even if it’s not, though, Daenerys, her three dragons, and her fleet of Greyjoys probably won’t encounter too much resistance when they arrive.

It remains to be seen how much support the Mother of Dragons will gather at Dragonstone, but with Tyrion Lannister the newly appointed Hand of the Queen, Daenerys stands a decent chance of gaining at least a few powerful allies at the old family stronghold.

The sloping, stone architecture of Daenerys’s throne and the buttresses of the hall behind her evoke the views of Dragonstone we’ve seen before. Perhaps in Season 7, we’ll get to see the stronghold as it was meant to be seen: with dragons perched on the battlements.

More like this
Entertainment
6.21.2022 1:00 AM
Game of Thrones sequel could ruin the best part of the series finale
By Alex Welch
Entertainment
6.24.2022 2:00 PM
Westworld Season 4 fixes the worst thing about Season 3 — but is it too late?
By Mónica Marie Zorrilla
Entertainment
6.14.2022 3:36 PM
Loki Season 2 release date may be sooner than you think, new report reveals
By Alex Welch
Share: