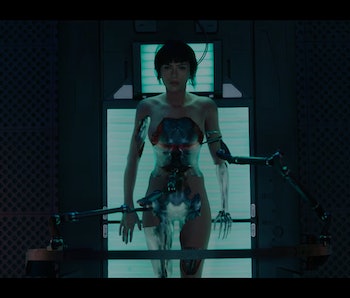 Ghost in the Shell premiered in theaters on March 31, and as is the custom, fans immediately began to sound off about it. The reaction to the film is decidedly split, with some fans praising the visuals, action, and overall execution with others decrying its whitewashing, which some say is even worse than was previously expected.

The new film is adapted from Masamune Shirow’s 1989 cyberpunk manga series that depicted a near-future as envisioned by the latter years of Japan’s technological bubble. The protagonist, Major Motoko Kusanagi, is a cyborg, a human brain inhabiting a robotic body. This drove the character’s internal conflict as she grappled with her identity while fighting cyber criminals. Mamoru Oshii’s 1995 anime adaptation introduced many Americans to the genre and helped bring anime into the entertainment mainstream in the West.

In the new adaptation, the unambiguously caucasian actress Scarlett Johansson stars as the main character, now named Mira Killian. Early press photos of the film from 2016 raised eyebrows as fans and critics questioned what appeared to be another example of Hollywood casting a white actor to play the role of an Asian character.

The U.S. film industry has a long history of casting white actors as non-white characters, including such notable examples as Natalie Wood’s “Maria” in West Side Story and Laurence Olivier’s blackface rendition of “Othello” in the film by the same name. Critics argue that this trend takes roles away from highly qualified actors of color and hurts the credibility of franchises. But that hasn’t stopped filmmakers from producing recent examples that sparked public outcry such as 2016’s Doctor Strange, in which Tilda Swinton plays Tibetan character “The Ancient One,” and 2005’s Batman Begins, in which Liam Neeson portrayed “Ra’s al Ghul,” a character typically depicted as being of Arab descent. These are just a few among so many examples. And let’s not forget the new Death Note adaptation.

It’s safe to say that the new Ghost in the Shell takes this trend a step further with some particular plot points that we won’t spoil here.

Some viewers even reported that they were reprimanded at official screening events for mentioning whitewashing.

This isn’t to say that viewer reactions are roundly negative, though. Many fans are responding positively to this new adaptation of a manga classic, especially in terms of the film’s art design.