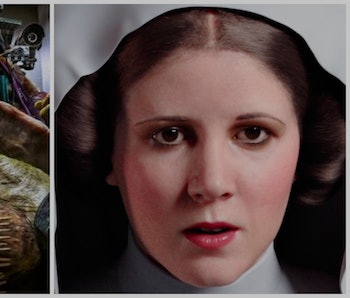 The long and winding road to a digital Carrie Fisher as Princess Leia Organa in Rogue One: A Star Wars Story began with fighting mutant turtles who love pizza. The VFX technology responsible for turning actress Ingvild Deila into Leia for the final moments of Rogue One was a motion capture technique pioneered for Teenage Mutant Ninja Turtles. Though the turtles obviously didn’t invent motion capture technology, the digital breakthrough program called “Snapsolver,” allowed for more realistic facial movements.

Somewhat ironically, fans probably don’t associate “realism” when they think of Ninja Turtles, and yet, without the turtles, Leia and Grand Moff Tarkin may not have been able to make their appearances in Rogue One: A Star Wars story as convincingly as they did. While Leia was only on screen for a short moment, Guy Henry’s Grand Moff Tarkin was a major character in Rogue One. As the special features on the digital release of Rogue One demonstrate, Henry did considerable research to recreate Peter Cushing’s essence, all of which made its way through the mo-cap effects.