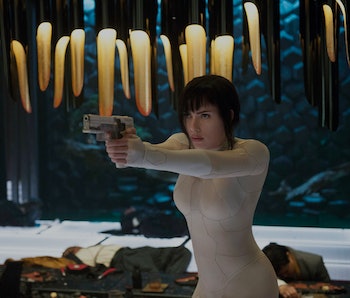 It’s rare, these days, to see a moviegoing audience get up from their seats and step over spilled popcorn as they shuffle out of the theater as soon as the film ends. That’s because pretty much every blockbuster has some sort of post-credits sequence that teases the inevitable sequel. Well, we’re here to tell you that you don’t need to stick around after watching Ghost in the Shell, because there isn’t a post-credits sequence.

The 106-minute-long film, which has gotten mixed reviews so far, tells the story of the Major, played by Scarlett Johansson. After a traumatic incident, her consciousness was inserted into a high-tech robotic body, making her a ghost in a shell, if you will. The 2017 version follows the Major, now working for the intelligence department Section 9 as she fights crime and discovers the truth about her past.

Without giving too much away, Ghost in the Shell doesn’t end in a way that demands a sequel. There certainly could be one, but there aren’t any major cliffhangers or unresolved plot threads, and there aren’t any teases about what a possible next installment could be about.

So, when the movie ends, feel free to get up and leave. Go outside. Look at the birds. Pet a dog.

Ghost in the Sell opens on March 31.