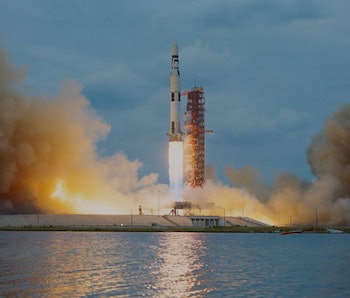 NASA launched a huge database on its website Tuesday which puts 140,000 different, photos, videos, and audio files in one place. With a simplified search function, you can dig through more than 50 years of scientific discoveries and landmark achievements, from the Apollo 11 landing on the moon to the Juno spacecraft’s most recent images of Jupiter.

The new digital library finally puts the incredible collection of NASA media in one place for the public to easily access its favorite space-related paraphernalia. Below is just a small sample of what you’ll find inside the massive collection.

Edward H. White II, pilot on the Gemini-Titan 4 spaceflight, becomes the first American astronaut to walk in space in June 1965.

An image of the Aurora Australis over the Tasman Sea near New Zealand, taken by the Expedition 29 crew aboard the International Space Station in 2011.

The Pathfinder spacecraft snaps one of the first pics of Mars in 1997, about six months after it landed on the planet.

Shortly before he became the first American astronaut to orbit the Earth in 1962, John Glenn Jr. peers into a clear globe with a map of the stars.

During his year in space, American astronaut Scott Kelly makes liquid art aboard the ISS in 2015 by putting a menthol tablet in a floating ball of water.

A view of Jupiter’s Great Red Spot, taken by the Voyager 1 spacecraft in 1998. The Great Red Spot is caused by a massive turbulent storm in the lower atmosphere of the gas giant.