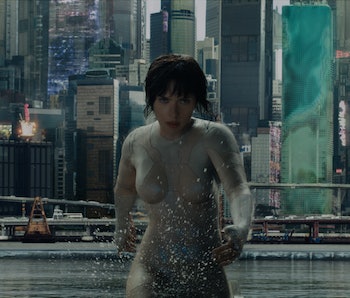 Jan Roelfs, the Oscar-nominated production designer, was no stranger to building the dense and endless cities of an imagined future, having earned one of those Academy Award nods for his work on Gattaca. And yet, Roelfs will openly admit to feeling shocked at the demands of his latest design assignment, director Rupert Sanders’ new live-action adaptation of Ghost in the Shell, the classic anime and manga series.

“Honestly I didn’t know about [the series], and I started realizing what an enormous fan base it had, and Rupert started realizing more and more that we had to do a sort of ode to the original manga,” Roelfs tells Inverse. “And it got more complex also because the original filmmakers also became part of it, and we had to have their blessing. So we worked an awful lot to make the anime alive.”

The original manga, by Masamune Shirow, began its run in 1989, and the anime adaptation, directed by Mamoru Oshii, was released in 1995. The story, about a brigade of mechanically enhanced human cops, is set in 2029 in the fictional Japanese metropolis of New Port City. The futuristic mega-city is so packed with soaring buildings and neon electronics that it seems almost skyless and suspended in a twilight hour. Famously, New Port City was based on Hong Kong instead of Tokyo, both because of the island nation’s mix of old and new and, as Roelfs explains, the filmmakers “didn’t want to confront the audience with a Tokyo that looked so dystopian.”

Roefls, Sanders, and the live-action Ghost in the Shell team made several scouting trips to Hong Kong, trying to both get a feel for the city and understand how it influenced the original anime. Shirow and Oshii each created worlds based on their assumptions about the future, which looked dark, rainy, slightly sinister, and filled with both old tactile machinery and what seemed to be the most logical versions of coming technology. Now the production team had to reimagine the city’s future again, substituting in new trajectories for technologies pioneered over the last two decades.

“We extended Hong Kong and made it bigger and taller and more crazy and dense. We made it way more a city of information, stacks on stacks on stacks of it. Because the movie is all about communicating how the brain can be connected,” Roelfs says.

Notably, the production team created the concept of “solidgrams” — a homebrewed moniker — that are the incredibly lifelike holograms displayed prominently, often as advertisements, in New Port City in this latest version of Ghost in the Shell.

“We have all these solidgrams and holograms flying through the city, and that was not in the original anime. But we liked the aesthetic of it, so we tried to get the language of the original and transformed it into our own language.”

These digital geishas and athletes tower over buildings, while creatures like fish swim through the sky at eye-level with pedestrians. In all, they shot about 200 different models, 70 of which made it into the movie.

They were achieved through a new photography process pioneered for this film by Digital Air and used by MPC, the movie’s lead visual effects provider. “We created a new camera system that allowed us to record those performances,” Guillaume Rocheron, the film’s visual effects supervisor, tells Inverse. “It’s a system that has 80 video cameras around an actor. It’s not just motion capture where you just try to capture their movement. We are trying to capture the skin, the hair, the cloth, the performance.”

In addition to the oceans of people and unending onslaught of visualized information, this New Port City is also stuffed with company logos, plastered across digital billboards and floating across the sky, ever-present for the urban consumers of 2029.

“We made a list of 300 companies worldwide and we asked their permission to go back to their ‘60s and ‘70s advertisements, with their old logos and typefaces,” Roelfs says. “But a lot of companies didn’t want to be a part of it. It was very complicated: they didn’t know what kind of movie it was, didn’t know how they’d be portrayed, and didn’t want to say that the Coca-Cola sign 30 years from now will be completely different.”

Xerox and Canon were two of the companies eager to be involved, which is semi-ironic, given that they’re best known for photocopying and printing, two technologies that might seem obsolete in Ghost in the Shell’s future; much of the film focuses on the Hanka corporation, which makes advanced artificial intelligence robots, a far cry from machinery that cannot overcome paper jams. Then again, including those advertisers was a safer play than filling the script with today’s technology, which will look equally obsolete, and far less stylized.

“What do you do, have people Facetime? God knows what’s going to happen in 10 years with communications,” Roelfs says. “You don’t want to outdate yourself, so you have to be very careful with that stuff.”

In fact, that anachronism actually worked with the sensibility that Sanders and Roelfs wanted to convey. Though the movie is set in a bustling future filled with advanced robotics and augmented reality as the new normal, there are some old callbacks. Roelfs wanted to retain some of the most iconic images from the original anime, while suggesting that we had not fully overcome the laws of gravity and the need for solid connections.

“It could be all in one chip, but we didn’t want to do it”

“Everybody is connected, through mind-coms and all kinds of things, but we also took something from the original anime, that everything’s still connected by a lot of cables,” Roelfs explains. “So you go ahead in time with the holograms, and you go back in time, with the cables. The villain’s lair had a ridiculous amount of cables. It could be all in one chip, but we didn’t want to do it, so that’s the ode to the original manga.”

If you look at the credits of the movie, you’ll notice that Shanghai and Beijing are included in the list of locations. There wasn’t much shot there, but the mega-cities provided an inspiration for the filmmakers, given the country’s rapid growth and soaring skyscrapers. China was far more closed off to the world when the original manga and even anime were made, and Roelfs was able to take advantage of its new embrace of modified capitalism to inform his designs.

“I shopped quite a bit in Beijing and Shanghai, and we bought quite a bit of stuff from there, and that’s a complete other aesthetic,” he says. “I remember when all the trucks came from China, Rupert said, ‘What the hell is that ugly stuff?’ If you see the original, Aramaki’s office is hysterical in terms of furniture, it’s definitely an aesthetic that I don’t know. So that’s what I tried to get out of that part of the world — over-the-top desks and big seats and sofas, all sorts of weird stuff.”

The trips to Hong Kong were not just for data collection and visual inspiration. “Those trips are where it all started,” Roelfs says. “We realized that, ‘Goddamn, look at this, they really went here, they went to these places.’”

So the intercontinental missions also became production trips, with the crew collecting as much on-location footage as possible. Principle photography on Ghost in the Shell lasted for 75 days, nine of which took place on the streets of Hong Kong.

“It was a very, very dense shoot for nine days. We had two or three units. Mainly we were on the Kowloon side of the city, capturing the decay that’s still there, though it’s rapidly disappearing,” he explains. “We shot Major’s apartment building — there’s a beautiful circular building there. We did all that, plus cityscapes, driving, and cars spinning through streets. We got her walking through the streets, in the hooker area. And we shot water scenes, with her on the boat and the dock.”

And so, some of the most iconic scenes from the manga and anime were actually shot on location, something you might not expect in a movie so driven by visual effects. The intent was always to marry the CGI with real life, and was, of course, plenty of visual effects work to enhance the city, to bring it into the imagined future that Roelfs and Sanders had so painstakingly devised.

“We replaced all the vehicles with futuristic vehicles, the architecture with more futuristic architecture and all of those holograms,” says Rocheron. “It was still very important because we could capture that texture. That bit of that grime. If you’re at a restaurant and they’re cooking noodles and you’re gonna get all those unexpected things that we kind of retained.”

They ventured over to the wealthier Hong Kong Bay section to capture what would be used as the exterior of the Hanka headquarters, and then built the interior on massive sound stages in Wellington, New Zealand, the movie’s home base. There were huge physical sets constructed for the movie, including the circular plaza and temple that are so crucial to the final sequence.

“Almost all of it — Hanka and the offices and rooftops, labs and the lair with all the cables — all that was built,” Roelfs says.

When asked to identify the biggest challenge his team faced in designing Ghost in the Shell, he answered precisely that: Conjuring up, sometimes from scratch, such an involved hypothetical future.

“What was hard was making something coherent between wardrobe, settings, and propping,” Roelfs explains. “All the characters had all these additions. Spectacles are also goggles and goggles are also headphones. Everything was built. Just imagine the amount of illustrations, the amount of concepts and drawings was astronomical. There was barely anything you could rent. We built furniture, all the medical stuff, the light fixtures, everything.”