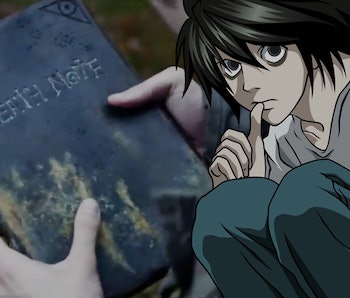 Netflix just dropped the first trailer for its highly anticipated adaptation of the acclaimed manga Death Note on Wednesday, but overnight, they followed that up with a new image that offers us our first good look at the series’s main antagonist: L.

The mysterious detective is tasked with finding out who is behind a series of unexplainable killings around the world. What’s really happening, it turns out, is that the main character, Light, has obtained a titular Death Note, a tool used by Japanese death gods. The book has the ability to instantly kill anybody whose name is written into the pages. The problem for Light, though, is that he doesn’t know L’s real name. In fact, no one does.

L, played in the film by Keith Stanfield, is a young, incredibly brilliant investigator. He’s also a total weirdo, a hermit of sorts who doesn’t really adhere to the rules of polite society. In the image, which shows L facing down Nat Wolff’s Light Turner, the detective has his back to the audience and is crouching in his seat in a singularly weird way. He’s an odd guy for sure, but it’s exactly this off brilliance that makes him the right person to try to bring a stop to Light’s killings.

The cops who find themselves forced to lean on L’s detective skills, as they all try to track down Light and his Death Note, begin to suspect that L and Light are enjoying their cat-and-mouse game too much to stop it. If Netflix’s Death Note follows the manga, Keith Stanfield and Nat Wolff will carry the drama with their adversarial chemistry.

Death Note, which is being directed by Adam Wingard, will hit Netflix on August 25, 2017.