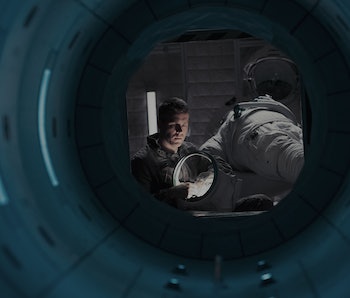 The new sci-fi alien thriller Life takes place on the International Space Station, but as any astronaut who has spent time up on the floating fortress could tell you, director Daniel Espinosa’s version of the ISS is far from accurate. There are specific rules that govern the way NASA and its expensive hardware are portrayed in fictional movies, and if the space agency isn’t involved, accuracy gets murky.

“We did not participate in Life,” the agency’s film liaison, Bert Ulrich, tells Inverse. Ulrich is the primary point of contact for filmmakers who want to incorporate NASA into their projects. “Even with Gravity, we only really participated after the film was finished and helped with some educational outreach.”

Gravity and Life are the only two major Hollywood movies to depict the International Space Station over the last half-decade. Neither of these films needed NASA’s permission to portray some version of the ISS, because a lot of NASA material — as government assets — is in the public domain. But when it comes down to specifics, like the use of logos and names, the space devils are in the details.

According to the official NASA Media Usage Guidelines, certain things require specific permission if they are to be used in a movie. According to the document: “The NASA insignia logo (the blue “meatball” insignia), the retired NASA logotype (the red “worm” logo) and the NASA seal may not be used for any purpose without explicit permission.” In Life, there is only one scene in which the word “NASA” appears at all, when the character Ekaterina Golovkin (Olga Dihovichnaya) prepares for a space walk in an attempt to rid the space station of the murderous, tentacled alien known as “Calvin.” On one shoulder of her space suit the audience will see a generic NASA patch, which bears no resemblance to the ones used by real NASA astronauts. Since Ulrich confirmed the production team on Life didn’t deal with NASA, a bespoke, faux-NASA logo was crafted. Meanwhile, the rest of the movie pointedly avoids mentioning anything overtly NASA-centric. They don’t talk to Houston or mission control. And though Dr. David Jordan (Jake Gyllenhaal) mentions the Challenger shuttle disaster, specific astronauts aren’t identified or mentioned by name.

Contrast this with the 2013 space-disaster movie Gravity in which Dr. Ryan Stone (Sandra Bullock) and Lt. Matt Kowalski (George Clooney) are sporting real NASA logos on their spacesuits in the very first scenes. In that film, despite the fact that their ship — called Explorer — is fictional, it is adorned with a real NASA logo on its wing. In Life, the fictional ISS crew wears generic jumpsuits, which are all pretty much the same, save for the fact that their arm patches denote their country of origin. It goes without saying that there is no real Pilgrim Mars probe like the one depicted at the beginning of Life. Even still, NASA isn’t necessarily prejudiced against speculative science fiction, even when it might involve time travel created by the power of love.

“Interstellar was another one we just did some outreach for after it came out,” Ulrich says. This outreach included NASA directly tweeting about Interstellar, as well as roundtables in which NASA representatives discussed the science of the film. The level of interaction explains why even though it took place in an imagined future, Cooper (Matthew McConaughey) still had a NASA logo on his chest with the correct and real NASA font. And there were other less-realistic films NASA has helped out with, too. “We participated in The Avengers, Men in Black 3, and Transformers: Dark of the Moon,” Ulrich says.

But for a film to really get the seal of NASA approval, real space science is better. It seems the closer to real space science a movie hews, the more NASA will invest their time and resources into it. For the ultra-realistic, 2015 astronaut survival story, The Martian, Ulrich says NASA was involved “from start to finish.” He also confirms “total involvement” was true of last year’s acclaimed NASA docudrama, Hidden Figures.

People spend a lot of time literally staring out into space in Life. And even though there are windows on the ISS in real life, they aren’t near as huge or luxurious as the ones depicted in the movie, and that lack of slavish devotion is another result of it not having much involvement with NASA. So, if cynical audiences are worried about the scary tentacle monster antagonist lacking plausibility in Life, that isn’t really the film’s biggest realism gap. Considering how little the film has in common with the actual look and feel of NASA, the space monster’s tentacles might, bizarrely, be the most plausible thing in the movie. After all, we know what astronauts look like, but no one has ever seen an alien.

Life is in theaters now.

More like this
Science
Feb. 1, 2023
65 Years Ago, America Launched Its Most Pivotal Space Mission Ever
By Jon Kelvey
Innovation
Jan. 23, 2023
These 5 futuristic tech ideas could help us explore distant worlds
By Jennifer Walter
Science
Feb. 6, 2023
How the Webb Telescope is Rewriting What We Know About the Early Universe, One Galaxy at a Time
By Doris Elín Urrutia
LEARN SOMETHING NEW EVERY DAY.
Related Tags
Share: