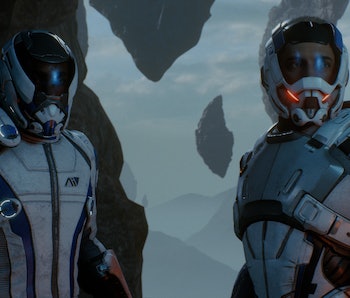 In Mass Effect: Andromeda, combat has been completely overhauled, moving from the standard mix of cover and abilities used in the original Mass Effect trilogy to a more fast-paced, open approach. Now, instead of sticking to walls and moving from box-to-box to close in on your enemies, you’re free to roam about the battlefield using Ryder’s new jet pack to get the drop on them immediately. Upon landing, you’ll automatically take cover behind appropriate objects scattered about the environment to regenerate your shields. Thanks to Andromeda’s new Profile and Skill system, you’ll be able to purchase and equip any set of abilities to use in combat against your enemies too, swapping between your favorite sets on the fly for whatever is best suited to your current combat scenario.

Since you’re able to equip any ability offered by Mass Effect: Andromeda’s combat, biotics, and tech skill trees, things can get a little overwhelming when you first dive in and begin planning your character’s active and passive ability point allocation. Naturally, some options are more effective than others, but don’t worry, because any build is just as viable as the next, provided you use it correctly. That being said, here are a few of our favorite options available in Mass Effect: Andromeda:

No matter how you plan to build your Ryder, you’ll want to spend some time investing skill points into the passive combat abilities which support the weapons you use the most in combat. Weapon passives fromthe Combat skill tree allow you to increase the damage, accuracy, reload speed, and ammunition count of every weapon in the game, with the final rank adding passive bonuses that increase the power further for each kill you get. You’ll need these by the late-game, and boy do they make your powerful weapons even more of a force to be reckoned with.

If you’re looking for a strategic edge in combat, Trip Mine is an ability worth pouring a few skill points into early on because of the tactical options it provides. Unlike the Omni Grenade, Trip Mine allows you to place multiple explosive mines that trigger when an enemy comes in close proximity or steps across a sensor laser. These can be used as combo detonators or primers too, giving you an opportunity to follow up on a wounded enemy with another ability for massive amounts of damage.

Since the open environments Mass Effect: Andromeda aren’t exactly covered with good objects to hide behind, Barricade is an ability that will save your life continuously if you find yourself caught in the open a lot. Barricade uses a slot from your power cell to deploy a temporary energy wall which boosts shield regeneration and provides combat bonuses to things like weapon damage in the process. While it is limited by the number of power cells you can carry, this is a combat ability you won’t want to ignore.

An old Mass Effect trilogy standard, Charge serves as one of the single most powerful disruption abilities in the entire game. Charge essentially allows the users to alter their mass and launch forward at an enemy target instantaneously, knocking them down and dealing immense amounts of damage in the process. Now that Andromeda let’s you use your jet pack to jump over obstacles which used to render Charge less useful than other biotic abilities, like Pull and Singularity, it’s a great way to detonate combo primers on enemies while disrupting their defensive lines.

This biotic power made its debut in Mass Effect 3’s multiplayer mode, and Annihilation is still a very simple-seeming ability be used in tandem with other abilities to wipe the battlefield clean in a matter of seconds when upgraded. When active, Annihilation drops a small area around you which deals biotic damage every second to enemies caught within. What’s great, however, is that it also primes them for combo detonations, meaning that an ability like low cooldown Throw or Lance can be continuously used to set off combos for large amounts of damage.

Overload, the first ability you’ll see in the tech skill tree, is a fantastic addition to any Ryder’s arsenal because you can always count on it to deal with shielded enemies once you’ve invested a few points into higher rank bonuses. What’s great about Overload besides its ability to knock out enemy shields is that you can use it two different ways by tapping or holding down the button you have it assigned to. Tapping it causes Overload to throw a quick discharge at a target which will detonate combo primers from abilities like Annihilation or Incinerate, whereas holding it down allows it to charge and chain to additional targets.

This classic ability lets your Ryder feel more like a Mandalorian than a Pathfinder. Flamethrower is a channeled ability which unleashes a short-range jet of fire which can be used to burn targets to a crisp if you can get close enough. Not only is Flamethrower extremely effective against armored enemies, but it causes ongoing fire damage to any enemy who isn’t protected by a shield, priming them for combo detonations when used with other abilities. Like Overload, Flamethrower is a must-have ability because of the damage it does to enemy armor, which will help you take down some of the most dangerous creatures in the Andromeda Galaxy.