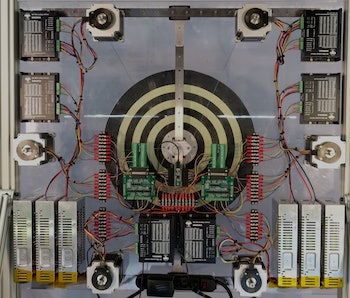 After years of work and “well into five figures” worth of investment, a new explanatory video from YouTuber and former NASA employee Mark Rober has achieved the impossible: making drunk people good at darts. Rather than work on muscle control, however, Rober’s approach was to actually move the board, compensating for even a truly wonky shot and ensuring that even terrible players hit the bull’s-eye nearly every time.

Rober has been obsessing over this particular build for longer than any other project for his show, which focuses on educational physics and engineering demonstrations. In this case, Rober told Inverse via email, the idea started as the simple quest to find “something hard [he] could make easy with a machine.”

And it sure is easy. When a throw heads toward the modified dartboard, a series of six IR cameras below and on either side of the flight space do range-finding to track the dart and its reflective tail. Simple trigonometry and projectile motion formulae can track the parabola of the dart’s motion forward until it intersects with the wall. The rig then automatically engages four motors to spin four coils of fishing line suspending the board, and move it so that it’s centered on the impact point before the dart actually arrives.

That is, unless you really suck. If the dart is so far off target that the computer sees it’s going to miss the board entirely, “the board just chills there and condescendingly doesn’t move.” When you do manage to chuck your dart near enough, however, the board actually recalculates the dart’s most probable impact point as it goes. “We’re doing a regression analysis,” Rober explained. “The more points you get, the more accurate.”

The project was incredibly complex, by Rober’s standards, taking over three years to complete — dozens of times longer than the average project. The reason was the number of complex parts involved in achieving the goal, from motion tracking the dark to finely controlling the motors. Rober made it clear it was gratifying to be able to finally discuss his most challenging project, by far.

However, in this day where anything up to and including quantum teleportation can be achieved in the lab, getting a perfect darts score can only be so impressive. To make it clear that the system was truly rugged, Rober took it to a local bar to have some genuine drunks have a go. The IR cameras could still see the darts clearly in the darkened room, and the board performed admirably through blind throws, behind the back throws, and jumping spin throws. It takes most of the sporting out of darts but, if you’re drunk, apparently not the fun.

When asked what his teased next projects will be, Rober would only say, “It’s like a cross between my World’s largest Nerf Gun, and this project. Bwuhahaha!”