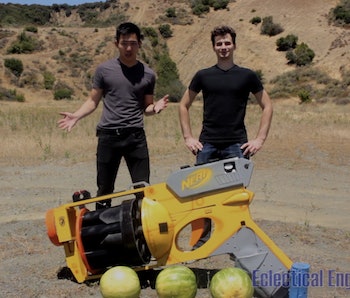 A group of engineers took the internet by storm this week when they debuted the world’s largest Nerf gun, a ridiculous scale-replica of the popular Nerf Maverick pistol.

The massive Maverick was custom-built by Mark Rober, a former NASA scientist who worked at the Jet Propulsion Laboratory on the Curiosity Rover project for nine years. Rober’s initial design enlisted the help of Ryan and David from Eclectical Engineering, who helped him rig up the paintball-tank propulsion system that shot out giant Nerf darts made with pool noodles and toilet plungers. We’ve seen some ridiculous Nerf modifications before, including a complete wheelchair to Snowspeeder mod, but no one has gone for the sheer size of Mark, Ryan, and David’s creation.

After Rober’s video went viral, Eclectical Engineering decided to take the whole thing to another level and make the Nerf gun an actual gun, transforming the compressed air propulsion system into a black powder cannon.

Naturally, we had some questions, chief among them — how is this legal? Ryan tells Inverse that “black powder cannons are legal from what I researched,” which is true, surprisingly. In the United States, it’s completely legal to construct a home-made, gunpowder cannon that shoots solid projectiles.

Sure, the Eclectical Engineering guys were very responsible, and only blew up a few watermelons with their Nerf boomstick, but the fact that backyard cannons are casually legal seems a little crazy — Ryan points out that they wouldn’t have much use for a criminal or in a mass shooting situation.

You can see the difference between airpower and firepower below — here’s the initial video of the Nerf modification:

Clearly, these mods were all in good fun, and weren’t intended to be actually dangerous. Hitting something with a gigantic toilet-plunger Nerf dart is pretty hilarious, and seeing a black powder cannon blow up a watermelon is never not going to be fun, but the destructive power isn’t something to joke about.

Ryan says the black powder cannon “totally can shoot anything you shove down its barrel,” but it’s “not very accurate.” This checks out as well — you can shoot pretty much anything out of a muzzle-loading black powder cannon. The only restrictions are that it’s not allowed to have a rifled barrel (which improves accuracy a lot), and it can’t use an actual cartridge or shell (like modern artillery). Ryan says that Eclectical Engineering had never built a functional cannon before, but the whole conversion from the air-compressed design cost about $12. The original giant Nerf gun cost about $300 to build. And it paid off for Ryan and David, whose new channel grew to 20,000 subscriptions in one day thanks to the Robar bump and some watermelon-destroying firepower.