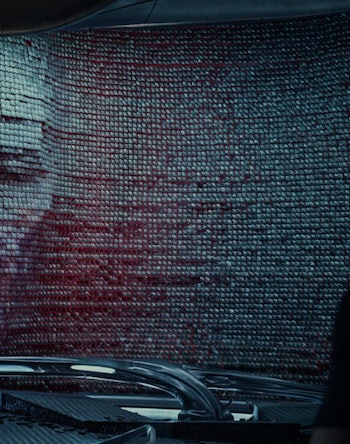 Of all of the mysteries of the Power Rangers universe, when and where Zordon exists is the most baffling.

In the classic TV show from the ‘90s, Zordon was banished to the interior of a time warp by the space witch Rita Repulsa in a final act of vengeance. But the movie changes Zordon’s location to a spaceship’s matrix, because somehow, that’s easier to understand. Regardless, we know he exists outside of “normal” time and can only communicate through an energy tube. These parameters, however, don’t tell us anything about where he is or when he exists. Physics, however, might help.

The key to locating Zordon in space-time — the conflation of the three physical dimensions and the dimension of time, as predicted by Einstein’s theory of relativity — is his ability to communicate with the Power Rangers in real time. Wherever he is, Zordon is able to communicate across that distance fast enough that there’s zero lag in conversation. Essentially, Zordon has resolved what astrophysicists have long struggled to figure out: How can we converse instantaneously across deep space?

NASA Jet Propulsion Laboratory mathematician Leslie Deutsch, Ph.D. is trying to solve this problem in his own research and explains that there are actually several ways Zordon could make this work.

To understand how, it helps to think of Zordon as a spacecraft. “Currently, the Voyager 1 spacecraft is the furthest [object] we can communicate with,” Deutsch tells Inverse, noting that communications with the craft are anything but instantaneous. Voyager 1, which launched in 1990, is outside the solar system, some 12.8 billion miles away from the Earth. When Voyager 1 sends us signals, it takes us 19 hours to receive them, and it likewise takes 19 hours for it to receive the signals we send across space. Zordon, it seems, has surmounted the problem of distance, which means he’s either got an insanely strong galactic communication system or has figured out how to bend the mesh of space-time in order to speed the process up.

Deutsch’s work focuses on creating the former through technology, but he explains that the latter would, indeed, allow Zordon to communicate infinitely faster than uninterrupted space-time would allow. While this seems like an exotic phenomenon, it “happens all the time” in our solar system, he points out: “Any time you have a large mass, like a planet, that generates appreciable gravity, you can measure the effects of space-time warps on communications signals,” he says. He’s noticed this with signals passing from, say, Voyager 1 back to Earth. “Pluto’s gravity bends that signal,” he says. “The distance for it to go from the spacecraft to the Earth has actually gone up slightly. And we can measure that.”

But how could bending space-time do the opposite — that is, decrease the distance between a spacecraft (that is, Zordon) and Earth? That, Deutsch explains, would require two or more gravity fields to interact strongly enough to bend spacetime in on itself. “If we were magically given something like a wormhole, then the path that the signal takes would conceivably be a lot shorter than other ways of getting from the transmitter to the receiver,” he says. “Going through the wormhole would be closer, in path. The signal should get there faster.” Power Rangers mythology doesn’t provide further details about the “time warp” Zordon was banished to — it’s not technically a term used by physicists — but a wormhole certainly warps the fabric of space-time, so it fits the bill.

Perimeter Institute astrophysicist Niayesh Afshordi, Ph.D. agrees that the only way for Zordon to communicate across huge distances instantaneously is if he manipulated gravity. Doing so certainly wouldn’t be easy, but, he tells Inverse that it’s technically possible. “The simplest way you could imagine is if you could harness black holes and then — I guess it’s not simple at all — use a reservoir of them and engineer things with them,” he says.

In the Power Rangers universe, if you imagine Zordon on one end on a floating sheet and the Earth at the other, pooling a bunch of black holes between them would be like throwing a weight into the center — the middle of the sheet would suddenly drop, drawing the edges together at the top, where their inhabitants could easily converse.

That said, Afshordi points out, the space-time manipulation explanation represents only what makes sense within the realm of conventional physics — that is, they operate under the assumption that nothing moves faster than the speed of light.

Afshordi says there are hints, however, that this assumption may not be true. “The age of the universe is 14 billion years, but the size of the universe as we know it is 47 billion light-years,” he says. “So it looks like the universe is expanding faster than the speed of light.” If this is true, Zordon’s communication signals could “ride” on top of space to take advantage of its speed, thus moving faster than the speed of light and getting to their destination faster. “It’s like you’re walking on a ship, and the ship itself is moving,” Afshordi remarks.

In this situation, Zordon could be literally anywhere in the expanding universe, armed with his communication system: Right now, our understanding of “distance” in the universe is limited by our conception of a light year, but once we start considering speeds greater than the speed of light, those metrics get thrown out the window. “This happens on huge cosmological scales” — much larger than what the Voyager-1 spacecraft deals with, Afshordi points out. Who knows how huge the scope of the Power Rangers universe really is?

Figuring out how Zordon communicates so rapidly over spacetime is a valuable exercise for astrophysicists trying to accomplish the same feat for humans. Our best bet for encountering extraterrestrial life, after all, is by intercepting their signals, but we need to develop the tools to pick up signals they send over great durations and great distances. While Deutsch relies on technology to help surmount the problem of space and time in communications, he maintains that the more fantastic scenarios he mentioned — the wormholes that could speed up communication to an instant — are totally plausible. “We expect we’ll find them,” he laughs. Likewise, Power Rangers fans can expect to find Zordon at the edge of some wormhole — or at the boundary of the universe — equipped with an insanely powerful communications system, as well as an understanding of astrophysics that scientists would do anything to possess.