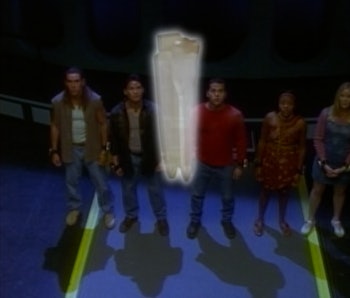 Like many superhero movies, the Power Rangers reboot uses a MacGuffin — an object that exists for no other reason than to drive the plot. While this sounds like a bad thing, when it’s done well it can lead to surprisingly fun results on a storytelling level. It remains to be seen how Power Rangers handles it, but this particular MacGuffin — which is called the Zeo Crystal — is particularly potent.

The Power Rangers movie is an origin story following a group of high schoolers who come together to save the planet from an alien threat. The Zeo Crystal is an object that Power Rangers villain Rita Repulsa (played by a scenery-chewing Elizabeth Banks) wants to use to destroy the world, as villains are wont to do.

In the original show, 1993’s Mighty Morphin Power Rangers, it was a power source that grew more intense with age. It’s thousands of years old and spent a good chunk of its life hidden inside the moon. Specifically, it’s hidden in the Caves of Deception beneath the Moon Palace, which was where Rita Repulsa lived during the initial Power Rangers show. The aliens who put it there surrounded it with a magical barrier so that anybody who isn’t “pure of heart” could get it.

In terms of the Power Rangers universe, the Zeo Crystal implies a plan for sequels, as it spirals into many different plots and corners of its time line. Assuming the film sees follow-ups, expect the Zeo Crystal to come up again.

To make matters more complicated, the crystal has a history with Rita Repulsa’s father Master Vile. In the third season of the television show, Vile obtains the crystal, but the Rangers scatter its five sections around the world. While that doesn’t happen in the movie, it could provide fodder for future plot lines if it develops into a franchise.