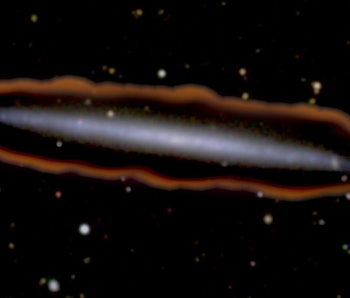 We imagine the universe is home to an infinite number of galaxies of all sizes, but instead scientists only seem to be able to find the big ones. Where are all of the smaller, lower-mass galaxies we were promised? A group of scientists may have just cracked open this mystery using a newly-developed method for detecting the invisible ultraviolet radiation in the universe’s background — radiation which starves small galaxies of the gas they need to form stars. Using this data, we can track where those half-formed buggers might have experienced a stunted growth.

What’s more, the research could be used to make accurate computer simulations of the origins of the universe and the evolution of galaxies through time. The research was published Wednesday in the journal Monthly Notices of the Royal Astronomical Society.

Lead author Michele Fumagalli, an astrophysicist at Durham University in the UK, and his colleagues began this investigation about two years ago, when the Multi Unit Spectroscopic Explorer (MUSE) was installed in the European Southern Observatory’s Very Large Telescope in Chile. The instrument provides astronomers with a color spectrum for each pixel in an image, which facilitates the mapping of red light. The team used it to observe UGC 7321, a galaxy 30 million light-years from Earth.

“The idea is that since we cannot look at UV radiation from Earth … we use a trick,” Fumagalli tells Inverse. “Instead we measure another type of light that is directly connected.”

We can’t see the radiation from Earth because it’s absorbed by the atmosphere, and even if we launched a satellite to study it from outside the atmosphere, it’s still too diffused to see directly. But when it interacts with gas, it shows up as visible red light. The researchers can use that to work backward and, from measuring the amount of red light, measure the amount of UV.

Larger galaxies — like the Milky Way — are protected from the radiation by thick clouds of gas, but in many cases computer simulations predict them to have smaller companion galaxies that simply don’t seem to be there. The radiation itself is produced by stars and very active black holes within galaxies; we know that a fraction of the UV itself can escape, but we don’t know how much. So by measuring it, we now have a direct way to characterize how efficiently galaxies are ejecting the radiation, which means we can also better characterize things like the temperature of the universe and how small galaxies generally evolve.

“If you put a glass of water in the sunlight, you see that the water evaporates,” Fumagalli says. “This is what happens with small galaxies. If you put small galaxies inside UV radiation their gas evaporates and they cannot form stars.”

The researchers run simulations with dark matter, which we think makes up nearly 85 percent of the universe’s total matter, but which has never been directly observed. One explanation is for why telescopes see few galaxies where simulations show there should be many is that some galaxies are actually there, they’re just too dark to see because the UV light has evaporated their gas. Basically, their dark matter doesn’t shine in starlight because the stars themselves couldn’t form, we didn’t have a way of mapping the right levels of radiation to help the models function more accurately.

“Now we can run simulations of the universe with the exact right quantities,” Fumagalli says.

We report the detection of extended Halpha emission from the tip of the HI disk of the nearby edge-on galaxy UGC 7321, observed with the Multi Unit Spectroscopic Explorer (MUSE) instrument at the Very Large Telescope. The Halpha surface brightness fades rapidly where the HI column density drops below N(HI) = 10^19 cm^-2 , consistent with fluorescence arising at the ionisation front from gas that is photoionized by the extragalactic ultraviolet background (UVB). The surface brightness measured at this location is (1.2 +/- 0.5)x10^-19 erg/s/cm^2/arcsec^2, where the error is mostly systematic and results from the proximity of the signal to the edge of the MUSE field of view, and from the presence of a sky line next to the redshifted Halpha wavelength. By combining the Halpha and the HI 21 cm maps with a radiative transfer calculation of an exponential disk illuminated by the UVB, we derive a value for the HI photoionization rate of Gamma ~ (6-8)x10^-14 1/s . This value is consistent with transmission statistics of the Lyalpha forest and with recent models of a UVB which is dominated by quasars.

More like this
Science
8.10.2022 7:15 PM
Beware! Dramatic image of spiral galaxies previews the future fate of the Milky Way
By Kiona Smith
Science
8 hours ago
How the Webb Telescope could unveil the newborn universe
By CAROLYN COLLINS PETERSEN and Universe Today
Science
8.12.2022 12:30 PM
Astronomers pinpoint the source of a mysterious cosmic particle
By Kiona Smith
Related Tags
Share: