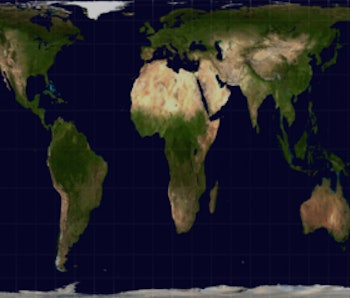 Visualize the world map. You’re probably imagining the Mercator projection, the standard used across American schools. Unfortunately, that map is wrong: It’s a variation of Gerardus Mercator’s design from 1569 that wildly distorts the sizes of the continents. Africa appears to be on par with Greenland, though it’s 14 times bigger, and South America seems about the size of Europe, though it’s twice as large.

But Boston public schools are gonna change that, kehd.

Boston’s map of choice is the Gall-Peters projection, which is used by the United Nations. It’s an “equal-area” map, which means that the surface areas of the continents are accurately proportioned.

The decision to use this projection, which was designed by James Gall in the 19th century and published by Arno Peters in 1974, is an effort to “decolonize the curriculum in our public schools,” said Boston’s assistant superintendent, reported the The Guardian. The old Mercator projection made former imperial powers appear bigger than their colonized nations. Check it out:

In contrast, take a look at Gall-Peters:

To be clear, neither projection is perfect. The Mercator map opts for accurate shapes over accurate sizes, whereas Gall-Peters prioritizes size over shape. A flawless representation of Earth is impossible; something must be sacrificed in a 2D representation of a 3D globe.

Of course, schools should maybe just use globes.

There are additional versions of the world map that are less popular, but more accurate than either Mercator or Gall-Peters; between those two options, though, the latter is the right choice. It’s less important for a kid to be able to correctly draw a coastline than to have an understanding of the basic proportions of the globe, especially since we associate size with importance and value.

As map scholar Denis Wood explains, maps are selective designs, so they’re not perfect representations; they’re “arguments about the way we think the world should be or could be.” We shouldn’t bolster a falsely Eurocentric version of the world in our schools.