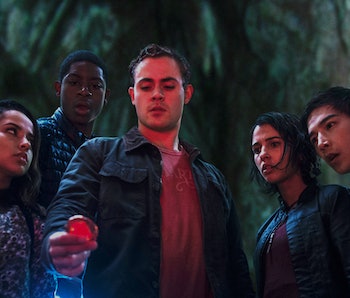 But what, exactly, are those powers? While quite a few of the Power Rangers in the various series have more specific special abilities, such as impenetrable skin a la Luke Cage or Black Canary-esque sonic screams, most of the Rangers are bestowed with Steve Rogers syndrome: superhuman enhancements that make them stronger, faster, and just generally better at doing anything physical.

These enhancements are why they can leap across ravines and accidentally destroy linoleum sinks.

Bestowing a teenager with sink-smashing abilities and zero guidance is a bit of an amazing plot, and that’s why the Rangers have Zordon (Bryan Cranston) and his lil’ robot minion, Alpha 5 (Bill Hader). They’ll definitely need Zordon’s sage guidance to help them understand their abilities and take on Rita Repulsa (Elizabeth Banks) by the end of the film. And that battle will be won with the Rangers’ most characteristic, iconic powers: control over Zords.

While it’s not exactly a superpower and verges much more towards being a perk, each Ranger is given control of a Zord: Those massive mechanical creatures they ride around in that are appropriately colored to their suits. The shape of each Zord varies. They can be humanoid in form, look like giant cars, or even like animals and mythical creatures.

So when the baddies get big, the Rangers hop into their Zords and take them down. But if that doesn’t do the job, then the Rangers and their Zords combine into a humanoid Megazord in one of the most blatant metaphors for teamwork in recent entertainment history. The source material is, after all, a kids’ show.

Witness the Powers Rangers and their superhuman superpowers when Saban’s Power Rangers premieres in theaters March 24.