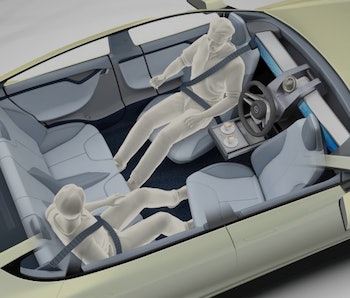 Your autonomous car could become an extension of your home. A place to eat breakfast, play video games, or have sex. And figuring out which of these activities you want to do most in an autonomous car is already on the minds of automotive designers.

“I started by comparing with in-flight experiences that everyone knows about,” Kota Kobayashi, leader of the Auto digital product design team at ustwo tells Inverse. People don’t actually do that much on planes, he said. “It came down to these three things: relaxation, entertainment, and productivity.”

With autonomous cars, he’s found that privacy, the length of trips, and an ability to leave the car when you want to are what people want.

“We have been exploring how we interact with these robots that will basically transport us,” says Kobayashi, who was the keynote speaker at an autonomous car design workshop hosted by Tech 2025 on Thursday in New York.

As Kobayashi described the design process his team uses, he touched on the most intimate of private moments.

“Inside a car is a quite private, intimate space, which is different from the public space of an airplane,” said Kobayashi. “A very good example of intimacy is having sex. Most people aren’t going to do that in a public space.”

Which means that creating cars with private spaces are a big part of fully autonomous car designs. “I think people may start to consider these in-car spaces as an extension of their home or office,” he says. This could totally change how we imagine transportation.

“Watching movies are something that are often talked about as something to do in cars but I don’t think that’s a commute-level thing,” Kobayashi said. “The length of time is quite different from a flight level experience.” Instead of three- or four-hour flights, driving usually happens in chunks of under 30 minutes. On top of that, because cars allow people to get out whenever they want, there is much more of an exploratory aspect to autonomous cars that makes designing more based on fun.

What people want to do in their cars is likely to change what kind of cars they purchase, Kobayashi said. He imagines that we will have things like sleeper cars, or meeting cars, or kid-friendly cars. This kind of division of car-function also showed up in the workshop section itself as well. Tech 2025 is a media-strategy company that works to educate the public on emerging technologies, so it invited a bunch of non-experts to workshop design ideas with Kobayashi.

The crowd of about 35 people was made of mostly young professional types in their early 30s, with a few college students. Before the talk began, all the participants mingled in the “beer hall” at the ustwo office in New York. Of the participants who spoke with Inverse, a number worked in technical fields like app animation, virtual reality, software development, and machine learning. Both Kobayashi and Charlie Oliver, the founder of Tech 2025, noted how diverse the audience was, although it was still only a third female.

“One thing I noticed is that a number of people have a hesitation to accept this fully autonomous society,” Kobayashi said at the end of the workshop section. “I heard this in a lot of groups.” This was a surprise to him. With such a young and technically savvy crowd, it’s unusual to have that kind of resistance to the technology. “I think some people were worried that this technology might not work and they got stuck on that in the conversation,” Kobayashi said. He typically only gets that reaction from older people who enjoy driving, but says he understands the anxiety about the autonomous future.

But even with the anxieties, he thinks that autonomous cars are inevitable, and will be a place to unwind. “I think mostly people like to relax, especially in more like a private time,” Kobayashi said.

So he’s focusing on making the autonomous cars of the future into comfortable, intimate spaces that aren’t going to change much in function from where they are now.

“I think mostly it will stay in a comfortable setting. Like when you look at car seats right now it’s closer to a couch than to a desk chair. And I think it will mostly stay that way unless a car is specifically designed for people to be attentive, like [a] meeting room.”