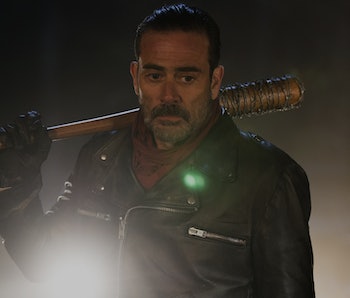 The Walking Dead introduced Negan as a villain in Season 6, and he immediately took a barbed wire bat to Glenn, Abraham, and the show’s once monstrously high ratings. Showrunner Scott M. Gimple says he’s learned his lesson from Negan’s Walking Dead takeover and has planned out a “quantum intense” finale for Season 7.

Although Negan was teased for months leading up to the Season 6 finale and all through the wait for Season 7, his presence on AMC’s monster hit has only been detrimental to fan engagement. The problem isn’t Jeffrey Dean Morgan’s performance as the gleeful psychopath — he snarls and grins nauseatingly well. The problem with Negan is that he’s truly relentless, torturing, and he’s humiliating our heroes with no end in sight. His only objective is causing pain, and while that’s great for a single shock value episode, it doesn’t create an inviting horror experience for viewers to tune into week after week.

Gimple tells Entertainment Weekly, “We step on the gas and we do not let our foot off the gas until the end of episode 16. Although because I’m working on season 8 now, the foot is on the gas again! I mean, the next three episodes we’re going to shoot you through a lot of big events and things become quantum intense.” He describes the rhythm of this season’s final moments as being a crescendo after a long lead-up rather than a sudden, violent peak the way Negan’s emergence was. This season has followed Rick and the gang’s continued efforts to build an army large enough to take down Negan and the Saviors, so that “quantum intense” finale will likely depict an all-out war.

The Walking Dead airs Sunday nights at 9 p.m. on AMC.