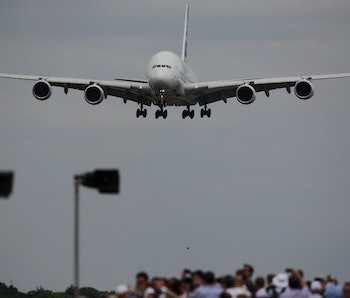 At some point last week, every passenger on tiny business jet had their worst dreams come true, when a massive Airbus A380-800 blasted over the small plane, sending it spinning, rolling, and twisting through the air in a crazy fluke of aerodynamics and physics.

According to an Aviation Herald report on March 8, the Challenger 604 business jet flew just 1,000 feet under an Emirates Airline Airbus A380-800 jumbo jet as the two planes crossed paths about 725 miles northwest from the Maldives. Between one and two minutes later, the smaller plane lost control and an engine failed, sending it into an uncontrolled roll, turning between three and five times mid-flight and sending it into an uncontrolled descent. Thankfully, the Challenger managed to regain control, but only after descending 10,000 feet and causing injury for a number of passengers. Following the incident, the aircraft diverted to Muscat. The plane was written off, several passengers were taken to hospital, and one had serious injuries. The incident, which took place January 7, seems like a bizarre anomaly, but there’s a clear scientific explanation for what may have happened here.

The issue appears to stem from the fact that the Challenger was caught in the much larger Airbus’ winds. When a plane generates lift, it leaves behind “wingtip vortices,” areas of circulating air left behind in its wake.

“The exact interaction of the A380 wake with the smaller aircraft would have depended on the local wind conditions, [which] can be recreated by modeling and simulation,” Kiran Rabesh, a lecturer in aerospace engineering at the University of Glasgow, tells Inverse. “But essentially, any small aircraft coming into contact with an A380 wake would be easily tossed and turned about as described.”

The bigger the plane, the larger the wingtip vortices, swirling eddies of air that trail behind the plane in flight. The craft’s wing size and weight both affect the size of these vortices, so in the case of the A380, these winds are going to be massive. The craft is a double-decker behemoth with four jet engines that seats up to 835 people. It has a maximum takeoff weight of 1.2 million pounds. This thing is huge.

Because of these winds, the International Civil Aviation Organization recommends minimum separation distances between aircraft during takeoff and landing. In the case of the Airbus A380, the group recommends a minimum space of 11 kilometers (6.8 miles). In instances where the succeeding aircraft is light, the minimum clearance is 14.8 kilometers (9.2 miles). For comparison, 1,000 feet (the reported distance between the two aircraft involved) is around 0.19 miles. In short, the Challenger jet got rocked, and it’s extremely lucky that no one was killed.

Germany’s BFU is currently investigating the incident, as the aircraft involved in the accident was registered in Germany.

More like this
Innovation
5.2.2022 8:00 PM
Is Russia's withdrawal from the ISS a bluff? Why it’s too soon to say if it’s leaving
By Nathaniel Scharping
Innovation
4 hours ago
Bentley Flying Spur Hybrid review: Price, specs, and one annoying thing
By Jordan Golson
Innovation
5.13.2022 11:00 AM
These robots have one special skill that could make human chefs obsolete
By Sascha Brodsky
Share: