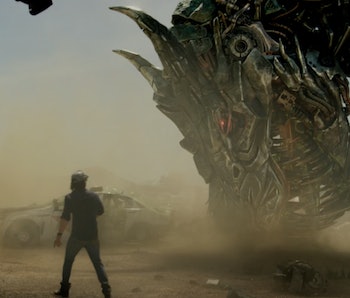 Transformers are, famously, more than meets the eye, but the upcoming Transformers: The Last Knight is a lot to take in. A new trailer shows off more of the nearly post-apocalyptic world that the series now takes place in and introduces viewers to the movie’s strong, resilient teenage female protagonist, Izzy. It also brings back everyone’s favorite robotic tyrannosaurus, Grimlock.

Paramount says the trailer, which came out on Thursday night, was specifically created to play ahead of screenings of the Beauty and the Beast live-action remake. It opens with a bunch of wisecracking kids casually exploring a demolished football stadium to check out some dead Transformers before they meet Izzy, played by former Nickelodeon star Isabela Moner. Izzy, who talks to the camera in a slightly disconcerting and Office-like way, explains to the viewer that she used to be a normal kid but has since become a bold, brave fighter with a connection to the Autobots. She eventually meets up with Mark Wahlberg’s Cade Yeager from the previous movie, who wants to protect her even as she tries to stay and fight.

“You think you’re a badass? ‘Cause it’s okay to be a kid, little JLo,” Wahlberg’s character tells her using some of that classic, casual Michael Bay racial humor.

At the end of the trailer, we see the Dinobot Grimlock chomping down on some busted cars like a big goofy junkyard dog. It’s hard to say what, exactly, the tone of this movie is.