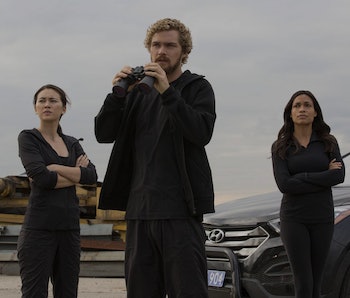 Let’s be real: just because someone is a superhero doesn’t mean they can’t still be a fuckboi. Although the definitions and spellings of “fuckboi” have varied through the years, fuckbois in their native habitats have always shared similar traits, but are most pointedly characterized by an unearned sense of entitlement and superiority. A douchey haircut is frequent but optional icing on the cake.

Xander in Buffy was a bit of a fuckboi, messing around on Cordelia in Season 2 and expecting Buffy to reward his acts of friendship with sex. Ron Weasley in Harry Potter was a fuckboi in Half-Blood Prince, dating Lavender Brown just to prove that he could. Theon Greyjoy was the ultimate fuckboi in early seasons of Game of Thrones before his unfortunate torture and dick loss incident. With reports of Danny Rand’s questionable personality in Marvel’s Iron Fist, let’s rank the fuckbois in the current crop of superhero television.

Legion’s David Haller ranks relatively low on the list because after spending years confused about what’s in his head and what’s outside of it, anybody would be a bit rusty at social skills. He’s also generally a decent boyfriend and brother. However, he does exhibit enough fuckboi behavior to rank, including his initial come-on to Syd.

When Syd encounters David inside his own mind, he even gaslights her into thinking she suffers from hallucinations. Though this particular David might be a manifestation of Lenny, it’s still classic fuckboi behavior.

Jessica Jones’s Kilgrave is by far the worst person on this list, as he’s a genuine rapist and killer. However, he ranks relatively low because he’s too obviously dangerous to truly be a classically defined fuckboi. Fuckbois are insidious, but Kilgrave wreaks destruction on a more massive and immediate scale, and he preys on women without trying to convince them that he’s decent first. He’s got all the qualities of a fuckboi — entitlement, assertion over women — amplified tenfold.

Supergirl’s Mon-El is a rare alien fuckboi. After his initial landing on Earth, he thinks he’s too good for a boring desk job and sleeps around National City instead. Because he later undergoes a redemption arc and develops an intriguing relationship with Kara, he ranks rather low on the list. However, his initial time on earth is classic fuckboi.

Daredevil’s Matt Murdoch inhabits a privileged world and is generally quite smooth with women. He fits the textbook definition of a fuckboi but he’s also less harmless and more complicated than that.

Arrow and Legends of Tomorrow’s Ray Palmer is a billionaire tech industrialist who just oozes charisma. In addition to that, he’s previously been a businessman, a professor, a heart surgeon, a vigilante, a knight of freakin’ Camelot, and he’s flown to the moon. It’s all kind of a long story. While being good at everything is not a fuckboi qualification, it certainly doesn’t help.

Danny Rand, played by Finn Jones in Marvel’s Iron Fist, is the ultimate #1 fuckboi. He saunters around with a casual “what’s up, brah” attitude while whitesplaining Asian culture, barging into corporate meetings unannounced, and acting condescendingly toward a female martial arts expert. He’s also a billionaire who sleeps outside bonding with a homeless guy just because he feels like it, and he is bewildered when people don’t react positively to him. He’s more of a fuckboi than Matt Murdoch or Ray Palmer because a true fuckboi thinks he’s much smoother than he really is. Danny Rand might have won the Iron Fist, but he’s also won the superhero fuckboi competition for now and forever.