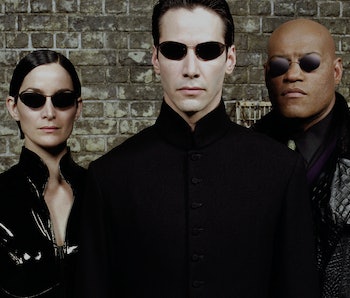 Warner Bros. is reportedly working on a reboot of The Matrix. Yeah, “whoa” is right.

According to The Hollywood Reporter, the studio is in the early stages of developing a revamped, updated version of the landmark 1999 cyber-action film. The Wachowski siblings, the creative minds who wrote and directed the original, are not involved, and it doesn’t look as though Keanu Reeves or any other original cast members will be returning.

THR notes that a new Matrix film could be a side story, a lá Star Wars’s Rogue One, though there are no real details on that front either.

Instead, according to THR’s sources, Warner Bros. is eyeing Creed star Michael B. Jordan for a leading role, though it’s still early in the process. Zak Penn, a writer who created the Syfy show Alphas and worked on The Avengers, is in talks to pen a treatment. There’s no indication that the Wachowskis have given the nascent project their blessing.

Why The Matrix needs to be rebooted and updated 18 years later is one question, but the more interesting thing to ponder is what, exactly, such a film would look like? The Matrix’s two sequels were not great, but the initial film’s smart, cyberpunk world was a breakthrough in the way technology was presented on film, to say nothing of the advances in special effects. The Matrix’s visuals were aped and parodied after the film’s initial release, and while they still hold up, a reboot would really have to go above and beyond distinguishing itself since the original was so groundbreaking.

And, like, how do iPhones work in the Matrix? Are all the robots going to have more of a sleek, Jony Ive look in the new film? And would the Matrix-version of Elon Musk be the new Neo, since he already thinks we live in a simulation? We’ll have to wait for more details.