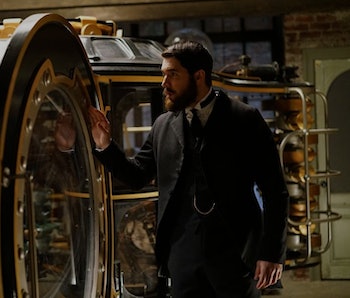 ABC’s Time After Time — which is about famous sci-fi author H.G. Wells and famous serial killer Jack the Ripper traveling from the Victorian era to modern day New York City — has an objectively goofy premise. But oddly enough, that’s what enables it to nail what makes the genre fun.

Time travel is dangerous storytelling territory. If a show or movie lets the audience in on the future too soon, the dramatic urgency is taken away. If the story meanders too much from the time-travel aspect, it defeats its own purpose. Time After Time maintains a sense of urgency and suspense while never losing sight of its main plot. All the while, it makes relevant points about the world and doesn’t take itself too seriously. In short, this is exactly what a time travel show should be.

Its main story revolves around H.G. Wells (Freddie Stroma) as the ultimate fish out of water in the modern era. After each faux pass — like expecting a woman to not be in charge of a museum — he regularly says things like, “Of course, things have changed a great deal since 1893; I can no longer make social and cultural assumptions. My apologies.” The show would drown in its own earnestness if it wasn’t for Josh Bowman’s Jack the Ripper, who revels in the modern era.

He’s delighted that you can walk into any store and buy a gun — “these people encourage it!” He maintains that man is an animal, and the camera follows him strutting animal-like through clubs as he lures in his victims. His future and our present is a serial killer’s playground.

It’s not without flaws, of course. The third episode introduces a third party tracking their time-traveling movements, and that has the potential to make the show too convoluted. And Wells remains too bubbly to be a true protagonist. But as long as the show features Wells and the John orbiting each other while grappling with the modern world and constantly dealing with time travel, it stands as an example of the genre at its best. Time travel stories are fun, but the best have points to make about each reality.

Time After Time is currently airing Sunday nights on ABC.