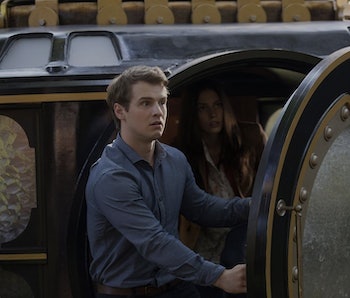 ABC’s Time After Time, otherwise known as “that new Jack the Ripper time travel show,” transports famous sci-fi author H.G. Wells and famous serial killer Jack the Ripper from Victorian London to modern-day New York City. The show’s most intriguing aspect is not its batty premise, which is taken from the 1970’s sci-fi novel of the same name. Rather, it’s the surprisingly apt point it makes about modern-day America being an ideal playground for a figure like Jack the Ripper.

In the first episode, the doctor John Stevenson, aka Jack the Ripper (played by Josh Bowman) time travels from the 1870’s to 2017. As he acclimates to our reality, he’s positively delighted by the world he finds. There are two specific areas that play to his interests: the ease and prevalence of violence and the accessibility of anonymous sex. Earlier in the pilot, he scoffs at H.G. Wells’s belief in a utopian future. John takes more of a Hobbesian bent. “Ah yes, your utopia where everyone lives in peace with no war or crime,” he sneers. “Mankind hasn’t changed in 200 years. We’re animals.”

Sure enough, in modern day New York, he looks downright animalistic as he prowls a nightclub looking for his next victim.

Against the backdrop of strobe lights and pulsing bass, he’s well-dressed, clean-cut, and handsome in a way that looks like he belongs in an H&M ad. He has no trouble enticing a woman into a dark corner because from the outside it’s hard to distinguish him from the regular ebb and flow of the nightclub scene. Sure, equating the sexual hunt with the serial killer hunt is a little on the nose, but Time After Time isn’t striving for subtlety. Part of the Hobbesian ideal that goes along with the famous phrase about life being “nasty, brutish, and short” is selfishness and instant gratification. Time After Time’s take on 2017 America captures this.

More intriguing is the point the show makes about the ubiquitous potential for violence. Later in the episode, John is in a bar while a television tuned to a news channel plays in the background. When H.G. Wells (played by Freddie Stroma) catches up to him, John points to the TV and says, “There’s your utopia, nothing but violence and bloodshed.” Of course, there’s more to modern-day America besides violence and bloodshed, but it’s true that a time traveler getting their information from the news wouldn’t know that. There is enough violence and bloodshed for it to provide constant fodder for the news cycle.

It’s this endless possibility for violence that excites John. “In our time, I was a freak,” he tells H.G. Wells. “Today I’m an amateur. You know you can walk into a shop here and purchase a rifle or revolver and it’s perfectly legal? These people encourage it!”

What Time After Time captures is not the fact that modern-day America is filled with serial killers and violence, but rather the potential for it. Even if it doesn’t literally lurk around every corner, it’s readily available in a way that it hasn’t been at any other time. Beneath its whimsey, Time after Time unexpectedly looks at 2017 American through a Hobbesian lens.

Time After Time is currently airing on Sundays on ABC.

More like this
Entertainment
5.13.2022 12:30 PM
How Chinese and Korean Dramas invented a new time-travel approach
By Taiwo Balogun
Culture
5.12.2022 11:30 AM
You need to watch this genre-warping time-loop anime on HBO Max
By Mónica Marie Zorrilla
Entertainment
5.13.2022 10:00 AM
Upload renewed for Season 3. How much longer can Amazon’s best show last?
By Eric Francisco
Related Tags
Share: