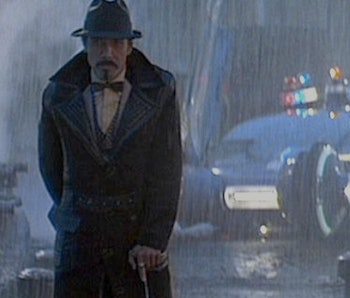 Before he was in command of a Battlestar fighting Cylons for survival, Edward James Olmos played Gaff, a man involved with helping Deckard track down replicants in Blade Runner. And now, Gaff is definitely back in Blade Runner 2049. And since Gaff is the guy who provided clear hints that Deckard (Harrison Ford) is probably a replicant, does this mean Deckard is totally a replicant?

On March 11, Edward James Olmos was interviewed by the TrendTalkShow and revealed, somewhat surprisingly, that despite previous denials, he is returning to his iconic Blade Runner role. “Let me tell you, I signed a seven-page non-disclosure agreement … so I couldn’t talk about it,” Olmos said. “But this is the first time I am telling everybody, I am telling the world, yes I am going to be Gaff in Blade Runner 2049.”

In the original Blade Runner, Gaff’s was an intrinsic part of what made the noir-future world so believable. Olmos developed the “cityspeak” dialect which Gaff spoke in, influencing future sci-fi slang (like on The Expanse) for decades.

Olmos said that he only has one scene in Blade Runner 2049 but “it’s a poignant little scene” — a poignant scene in which he and Deckard share a drink and talk about what it’s like to be an aging replicant? Almost certainly.