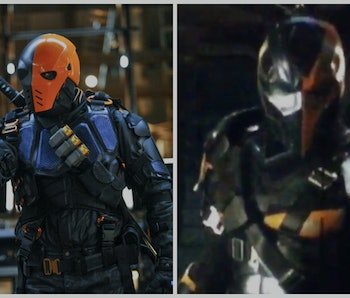 Joe Manganiello has been practicing a full combat routine specific to his character Deathstroke, who is slated to appear in DC’s Batman movie. That troubled film starring Ben Affleck will be directed by Matt Reeves of the Planet of the Apes prequels, and conflicting reports on the script’s quality have been floating around for months. Whether or not the Batman movie is any good, Manganiello seems psyched to play a supervillain as best he can. When asked if he’s consulting previous adaptations of the character, however, he sounds pretty dismissive.

In an extended interview with Robert Irvine Magazine, Manganiello says, “[Deathstroke] is an incredibly athletic role so all of the training is very functional. I’ve also started Kung fu and chi gung training, and I’ve also started working with katanas.” The katanas, of course, have long been a part of Deathstroke’s ensemble, and they appear across comics and animation. Manganiello also adds that the fact that he’s in his 40s has only enhanced his ability to knock a supervillain role out of the park. “I can go harder than I’ve ever gone in the past in terms of cardio, the intensity is ratcheted up probably times 10. I’m lifting heavier than I ever was. I am constantly achieving new heights in terms of max.”

Doubling down on all this boasting, Manganiello says he’s aware that Deathstroke has appeared on Arrow previously but says he’s not interested in watching those episodes. “I guess there was a TV show,” he says, “but I haven’t seen it. I won’t watch it. This is my character, an exciting one, and has the capacity I think, to be a great villain.”

Deathstroke was played on Arrow by Kiwi actor Manu Bennett in Seasons 2 and 3. When the character was removed from the script in later seasons, Bennett was extremely disappointed, telling the press that Arrow had mishandled the character. In an interview with an Australian paper, Bennett said, “I think they took it in the wrong direction.”

The DCEU Batman film does not currently have a release date.