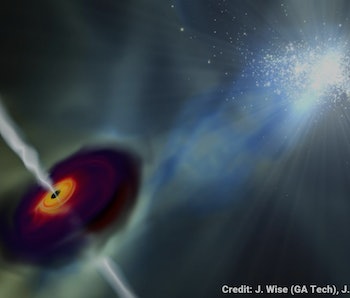 The running hypothesis is that black holes are born out of the collapse of a star, which can eventually suck up enough mass that they grow into supermassive black holes (SBHs). That process is thought to take billions of years, but scientists have already catalogued some SBHs that date back to 13.8 billion years in age — also the age of the universe. This would mean that some SBHs, if not all, form much more quickly than scientists originally suspected.

“The collapse of the galaxy and the formation of a million-solar-mass black hole takes 100,000 years — a blip in cosmic time,” Zoltan Haiman, an astronomy professor at Columbia University, said in a press release. “A few hundred-million years later, it has grown into a billion-solar-mass supermassive black hole. This is much faster than we expected.”

Two things are absolutely necessary for an SBH to form: A ton of mass, and gravitational force. Going by these two rules of thumb, Haiman came up with a new hypothesis back in 2008. What if the SBHs weren’t being created from within their host galaxies, but being fed by neighboring ones?

Haiman believed that if a huge nearby galaxy could pump enough radiation into a smaller galaxy that already hosted a black hole, the radiation could split molecular hydrogen into atomic hydrogen, stopping the galaxy from forming new stars and ultimately forcing it to collapse under the gravitational pressure of the black hole. Thus, the black hole would suck up that mass and quickly become an SBH.

To test this hypothesis, Haiman collaborated with John Regan at Dublin City University in Ireland. Together they simulated this process by crunching numbers on a supercomputer, running through different variations of fluid dynamics, gravity, and radiation. Their findings, published the new paper, proved that with just the right combination, this process could indeed create an SBH.

“The nearby galaxy can’t be too close, or too far away, and like the Goldilocks principle, too hot or too cold,” John Wise, co-author of the study and associate astrophysics professor at Georgia Tech, said in the press release.

There is still much more to understand about SBHs before drawing any conclusions. But with the help of the James Webb Space Telescope, which will be launched by NASA next year, to confirm this theory, the team is hoping it might have finally solved this longstanding mystery once and for all.