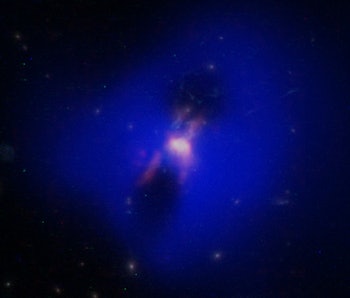 Black holes always spell bad news for matter, right? Well, new observations of the Phoenix Cluster using the Atacama Large Millimeter/submillimeter Array (ALMA) in Chile suggests black holes aren’t the harbingers of death and destruction they’re normally thought to be. In fact, they may be fertile grounds for allowing new stars to be born.

Typically, black holes stop the formation of new stars by sucking up all of the cosmic dust and gas that they need to form, like space’s version of a vacuum sucking up dust bunnies. But the Phoenix Cluster, a rare and extremely massive formation of several galaxies, is held together by the gravitational force of a supermassive black hole in the center. The new ALMA data, presented in a new paper published in The Astrophysical Journal, reveals the black hole is releasing jets of radio waves that are pushing giant bubbles of cold gas into the hot plasma that surrounds the galaxies.

The cold gas should be cooling the galaxy from fueling new star formation. But, instead, the bubbles contain molecular gas that can actually create stars, not kill them. Scientists calculated that the gas could create up to 10 billion new stars. It’s like an “out with the old, in with the new” process in which the galaxy and black hole are, in fact, working together.

“With ALMA we can see that there’s a direct link between these radio bubbles inflated by the supermassive black hole and the future fuel for galaxy growth,” Helen Russell, an astronomer with the University of Cambridge, UK and lead author of the new paper, said in a press release. “This gives us new insights into how a black hole can regulate future star birth and how a galaxy can acquire additional material to fuel an active black hole.”

If it weren’t for the black hole releasing cool air, the galaxies would have so much heat that they’d be churning out stars at a highly accelerated rate. So, the black hole is actually keeping the galaxy in check.

These new findings are a significant step toward understanding a black hole’s thermostat-like functions, a phenomenon that has baffled scientists for decades.