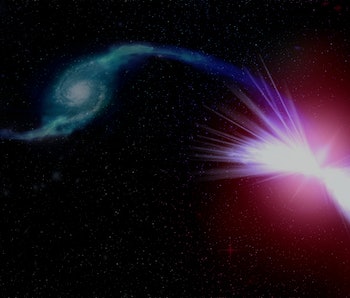 The Earth is getting warmer. And scientists are finding out now that some galaxies are, too.

After years of investigating the mystery behind this so-called “galactic warming,” a new study conducted by astronomers working at the Sloan Digital Sky Survey points to supermassive black holes as the reason for an extreme rise in heat that leaves a galaxy barren of newborn stars.

Specifically, the Sloan team have identified a specific new kind of galaxy called a “red geyser” that houses supermassive black holes. The black holes in the center end up creating powerful celestial “winds” that cause these galaxies to retain an exorbitant amount of hot gas and energy. With the interior staying toasty, there’s not enough energetic stability to allow gases to come together and cool off in a way that gives birth to stars — even extremely hot ones.

It’s kind of a strange thing to think of red geysers as galaxies themselves. After all, a galaxy is a collection of stars, and these bodies are essentially devoid of the ability to create new ones. Stars themselves are simply the collection of gas into a gravitational hold that results in a big ball of high energy. Within red geysers, you have all the gas you need, but the supermassive black hole in the center keeps blasting away at the gas and makes it too cool and unstable for stars to form.

In findings published in the journal Nature, the research team shows it was able to finally identify the reason behind this stellar infertility by using a new component survey called Mapping Nearby Galaxies at Apache Point Observatory (MaNGA), capable of getting a better look at the internal structure and motion of stellar gas permeating throughout a red geyser.

“With MaNGA’s technological upgrade to the Sloan Foundation Telescope, we can make detailed maps of galaxies ten to a hundred times faster than we could just ten years ago,” says University of Kentucky astronomer and study coauthor Renbin Yan. “Since MaNGA studies so many galaxies, our snapshots can reveal even the quickest changes happening in galaxies.”

MaNGA led to the discovery of Akira, a red geyser affectionately named after the famous Japanese manga comic character. Akira has a neighboring galaxy, Tetsuo (also named after a character from the comic), and was pulling gas away from it. In essence, Tetsuo’s gas was powering up Akira’s winds and leaving the latter barren of new stars.

While the reasons behind global warming on this planet are still debated (unless you believe in science, in which case you understand humans are definitely contributing to it), the mystery behind galactic warming seems to be solved. More intriguing, however, are the consequences for the future of red geysers.

The Sloan team suspects that this phenomenon could be actually quite common in other galaxies as well — there’s no reason to think our own Milky Way galaxy is immune to galactic warming. Billions of years from now, the supermassive black hole at the center of our own galaxy could spew out winds strong enough to bring about a new era of interstellar dormancy.

With new research published this week demonstrating that supermassive black holes may have formed much faster than previously thought, it wouldn’t be a stretch to think they could also transform into torrential monsters faster than we think as well.