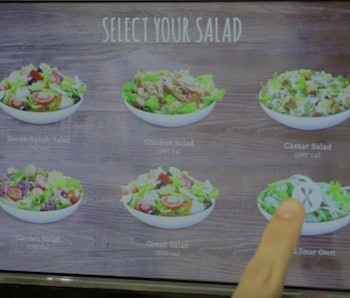 Imagine this: It’s Tuesday, and you’ve got a busy, busy day at work. Your boss is breathing down your neck and you’ve got deadlines coming up. There’s barely time for you to grab lunch, but you manage to sneak out, briefly, to order a salad that you pitifully eat at your desk.

What if you could take that same scenario, but remove the human component, making the entire experience more efficient and significantly sadder? It’s not so crazy.

Chowbotics Inc., a startup that develops food-serving robots, has created an automated machine that makes more than 1,000 types of salad. The robot, which has been named Sally (get it?), recently helped the company raise a cool $5 million in VC funding. Chowbotics says Sally is still in the trial phase, and will soon be tried out at a local California Italian restaurant called Mama Mia’s along with cafeterias at San Francisco’s co-working space Galvanize and the Texas grocery chain H-E-B.

Sally is technically a robot, but it looks and acts like a fancy vending machine. Customers use a touch screen to select the type of greens, meats, veggies, toppings, and dressing they want, and Sally spurts out the chosen ingredients from 20 food canisters. Chowbotics says this setup lets customers chose exactly how many calories are in their salad, as seen in a vaguely upsetting promotional video where a woman decides to order an 81-calorie salad as her entire meal.

The robot does, undoubtedly, make salad more efficient. Chowbotics doesn’t plan on bringing Sally into homes for at least five years, but they envision seeing it commercial restaurant settings, or at locations where people might need to eat fresh around the clock, like an airport or hospital cafeteria.

Chowbotics CEO and founder Deepak Sekar told TechCrunch that fast food restaurants might want to adopt Sally because it greatly expands the number of salads they can offer. Most chains only have a few salads on their menus, and most of them are above 400 calories. Sally, which can be programmed with customizable recipes, can make all sorts of salads.

However, this is all very sad. A deluxe salad with unique, fresh ingredients that’s been lovingly crafted, can be a lovely meal. Shredded lettuce that’s been sitting in a food canister for an unknown amount of time that you order by pressing a touch screen … less so.

Chowbotics says it wants to branch out and start making robot chefs that can tackle other sorts of cuisine. Maybe it’ll catch on, maybe not, but at times like this it’s nice to remember what The Simpsons said: