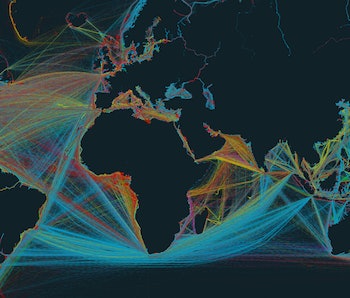 Floating cities are an idea that receive a lot of suspicion, and with good reason. Who wants to live on an isolated platform in the middle of the sea, never seeing an outsider and rarely getting supplies from the outside world? As it turns out, the notion that the ocean is some barren wasteland is a misconception. A large amount of global commerce is conducted on the high seas, making floating cities a less ridiculous idea than they first seem.

A map created by data visualization firm Kiln uses information from the UCL Energy Institute, showing movements of the global merchant fleet over the course of 2012. It reveals the hidden routes that criss-cross the world, forming a complex network of global cargo movements. Although it moves across empty seascapes, cargo liner shipping accounts for about two-thirds of all global trade. Check out the map below, or visit the ShipMap website for an awesome interactive version.

Floating cities have received attention from a number of places. Libertarian billionaires like Peter Thiel are often associated with the concept, which would let people live outside the realms of government interference, living only by the laws on international waters. Thiel pledged $1.25 million to the Seasteading Institute in 2011 to explore the idea.

You’ll notice that even in seemingly empty waters, there’s a number of points with high amounts of through traffic. Hawaii to San Francisco, for example, has a thick line going between as the quickest route between the two points. Similarly, the southern tip of Africa sees a large number of ships moving through to get to either side. Much like the Panama canal and other through points, floating cities have a chance to become key stop-off points for ships passing through, serving as economic hubs of the high seas. In this version of the map, you can even see individual ships moving around the waters:

It’s easy to picture floating cities on this map, as tiny balls of light where many ships congregate in the middle of the ocean. But unfortunately, it’s unlikely that we’ll be living in Waterworld-like sea stations anytime soon. The Seasteading Institute announced in October that it was nearing a deal for a special economic zone in French Polynesia, allowing residents to visit the nearby mainland for supplies. But Thiel told the New York Times in January that these islands are “not quite feasible” right now. It may be a while before the dream comes to life, but make no mistake: Thiel et al probably won’t be building their island in completely empty waters.