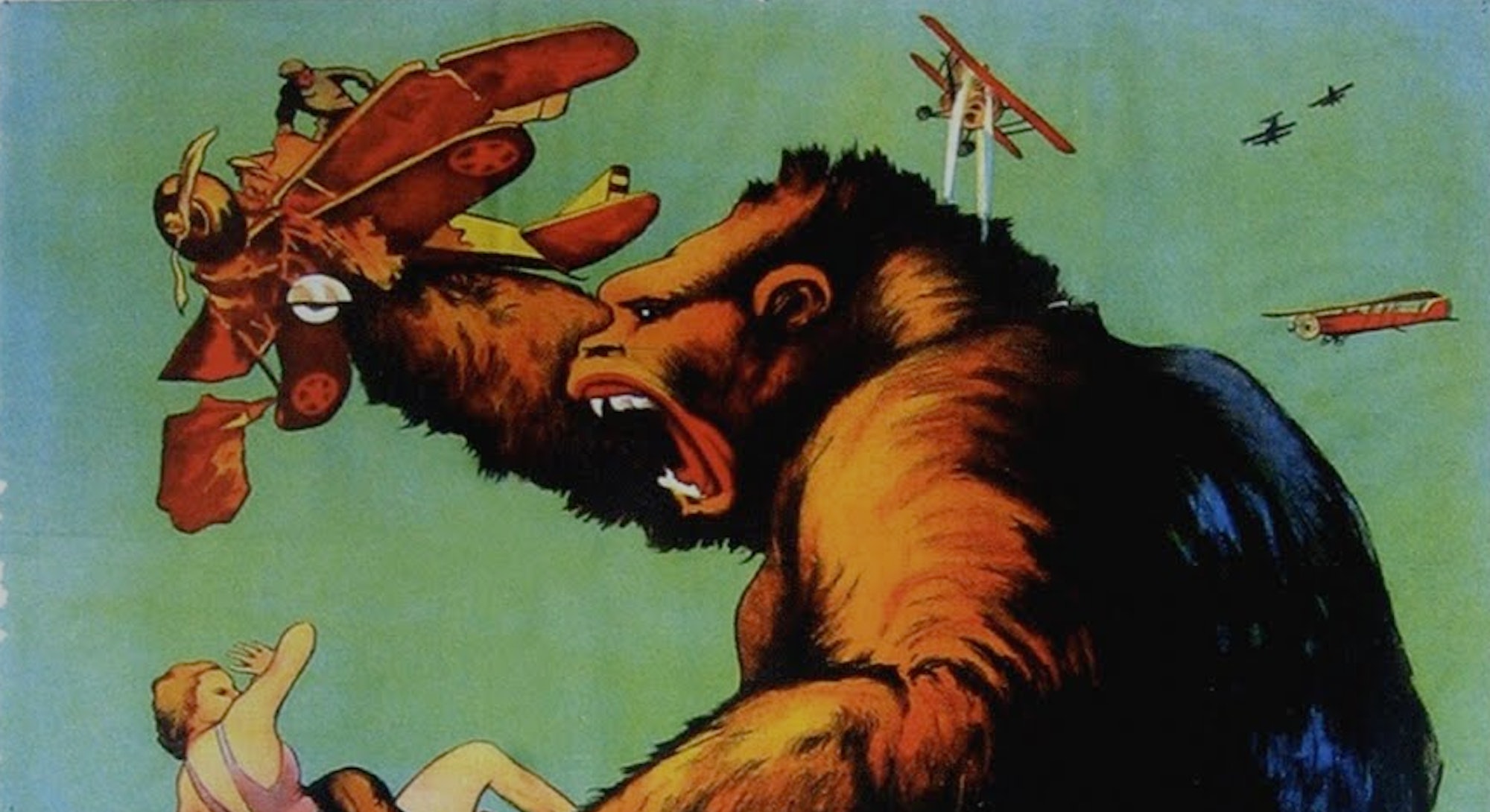 Merian C. Cooper was the type of person whose job title was literally and unironically “adventurer.” His autobiography made legends seem bland: At just 6 years old, Cooper decided he’d be an explorer. He grew up to be a fighter pilot, spent nine months as a Soviet prisoner of war, chased Pancho Villa through Mexico, and once narrowly avoided capture by Ethiopian pirates.

So it might not be a surprise that Cooper allegedly had the type of dreams that made for epic films. The adventure-turned-story that earned him a star on the Hollywood Walk of Fame was that of a humongous ape terrorizing New York City — the story of King Kong.

The 1933 film not only became one of cinema’s most enduring franchises spawning several movies movies of varying quality, but a story that’s been rebooted throughout subsequent decades, the latest version being Kong: Skull Island, coming out Friday. It’s the King Kong origin story, the one that retraces the discovery of a monster.

The twist in this (potentially) tall tale? Cooper might not have been inspired by a dream, but rather the even wilder expedition story of his ridiculously rich pal, William Douglas Burden. That’s the assertion of Tom Baione, director of library services at the American Museum of Natural History, an institution to which both Cooper and Burden were invested. “Burden was Cooper’s friend,” Baione tells Inverse.

Burden was a 28-year-old upshot thirsting for the unknown. He was classically handsome — broad forehead, intense gaze, chiseled jawline, immaculate curls — and a sucker for a good adventure, just like Cooper. He preferred wild backwaters and thorny jungles to the comfortable plush lifestyle he’d grown up with as a descendant of the Vanderbilt family fortune. Burden was rich, handsome, Harvard-educated, and itching to explore a place as far away from New York as possible.

In 1926, Burden was able to scratch that adventure itch when he sought and received permission from the Dutch government to collect a Komodo dragon specimen in the Dutch East Indies (now modern day Indonesia). The trip would involve hunting for an animal that had been described as about 30 feet long and was the direct descendant of the dinosaur. No white man had ever been able to capture the Komodo dragon. Burden, who’d just gotten elected as a trustee member for the museum, saw an opportunity for swashbuckling. What could be more risky, more unfamiliar, more adventurous than hunting for an animal whose colloquial name encapsulated a mythical creature and an exotic jungle? Nothing.

“So Burden headed to the Dutch East Indies with a cameraman, a herpetology professor, and his wife” — the socialite daughter of a former New York state governor, renowned for her beauty, Catherine White Burden — “on a ship called The Dog,” Baione recounts. Upon arriving in Komodo, a local raja offered 15 native hunters to help bait and traverse the tangled wilderness.

Together, Burden and his band of dragon hunters explored the island, a stark contrast to their flapper-era, bourgeoisie New York. Most of Indonesia’s 17,000-plus islands were originally formed by volcanoes, but Komodo was different; in Burden’s later writings, he called it “haunting, mysterious.” Komodo was studded with rock formations that prohibited human settlement and crawled with unique vegetation and animals: water buffalo, cockatiels, insects, and, of course, the Komodo dragon.

Burden and his wife personally took to setting traps for the Komodo dragons, which were shorter than they had been described but heavier than any human they had probably ever encountered: about 10 feet long and 350 hefty pounds. The Komodo dragons were perhaps more vicious than the stories told about them, thrashing at vegetation with ease, eerily dinosaur-like in structure, “effortlessly devouring a whole buffalo at one sitting,” reported The New York Times in Burden’s 1978 obituary.

“It was difficult to get to, and the waters around the island were troublesome,” Baione says. “And they had to contend with these giant lizards on top of that.” Capturing the lizards was the couple’s assignment, and the Burdens realized it was going to take a lot more than sapling boxes layered in buffalo meat to capture them.

“They captured a large one in these traps and put him in a crate,” Baione recounts. “To their astonishment, it managed to escape through the industrial scale wire mesh. That told them two things: It can stand on its back legs, and it has strong jaws and claws that can break through the wire.”

Mrs. Burden wasn’t comfortable dragon-hunting and living with her husband’s whimsical adventure, either, despite being a “great shot” and acting as the expedition’s photographer. She loyally accompanied hunters, but on one trip, she was laying a trap and walked off, only to find herself facing down a Komodo dragon. “The hunter she had traveled with was out of sight, and she was petrified, so she just closes her eyes and hopes for the best,” Baione says. “When she opens her eyes, the hunter has reappeared and shoots the dragon.”

“She was this sophisticated, entitled, wealthy, civilized, beautiful woman in close contact with this beast,” Baione says of Mrs. Burden. In fact, the juxtaposition of helpless damsel against untamed beast made for what would later become King Kong’s iconic scene of Fay Wray flailing in the ape’s grasp.

The Burdens’ triumphant return — along with a final tally of over 3,000 amphibian and insect samples as well as three Komodo dragons — made for a wildly popular exhibit at the Bronx Zoo, where two Komodo dragons were put up briefly before dying and becoming taxidermied.

The Burdens also were one of the first to shoot film of their expedition, creating “Komodo mania” at the Bronx Zoo, and attracting unprecedented crowds numbering about 30,000. “We don’t come close to that now,” Baione says.

It’s here that the King Kong story was birthed, within the depths of a crowded exhibit that included a diorama of a taxidermied gorilla. It stole the show from the Burdens’ Komodo dragon hunt. Up until its collection in 1926 (not on the Burden expedition, but included as side fodder), Americans had never come seen a gorilla. It makes sense — primates are impossible to find in the wild in North America due to the region’s cool climate and lack of year-round vegetation. Gorillas had been described and drawn, but a real gorilla, stuffed in all its glory, had not ever been seen.

“It’s the museum’s most famous exhibit,” Baione says, pointing to the exhibit’s wild success as the reason why gorillas became a mainstay of today’s zoos.

Cooper — the adventurer who moonlighted as Burden’s buddy — was entranced by Burden’s tales and fascinated by the nickname Burden had given the large dragons of Komodo, “King Komodo.” Cooper also couldn’t help but be fascinated by the story of Mrs. Burden’s dramatic close call with the Komodo dragon while in Indonesia, but swapped out the dragon for a massively large gorilla capable of scaling the Empire State Building.

While the details of the swap-out from dragon to gorilla remain unclear, what is clear is the fact that he’s the ideal fantasy monster because he is so unrealistic. He represents a threat in a way that is both frightening and unimaginable, and — nearly a century after being conjured by Merian Cooper’s apparent taste for alliteration and hard Ks — retains a near-universal fascination.

In this fraught political era, it’s perhaps notable that Kong’s movie monstrosity represents the tension between nature and nurture. King Kong, after all, has long been criticized for being a metaphor for the deeply rooted fear white Americans had for African Americans, for the “other,” the giant question mark of the unknown and unfamiliar.

There’s a certain timeless conflict to the King Kong origin story that Baione thinks has made the film one that retains topicality. “The point the filmmakers are trying to make, using Kong and the Komodo dragons, is that of [the reach of] civilization,” Baione says, arguing the implication of the skyscrapers that were dotting the New York skyline were representative of our efforts toward progress amid a conflict with nature. “Kong lives in the last outpost of true civilization. One has to kill the other. In the early 20th century, development was everywhere, but people were beginning to think about conservation also.”