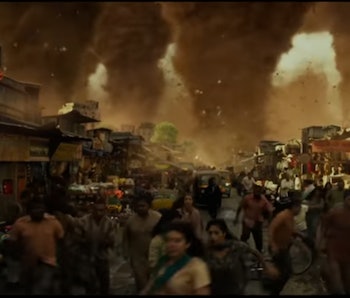 Humanity has figured out how to control the weather in Dean Devlin’s upcoming ecological thriller, Geostorm — but, of course, they fuck it up.

The first official teaser trailer for Geostorm shows a world where humanity has built satellites that allow for remote control of the weather. Thundering hurricanes can be whisked away by launching tiny rockets from an enormous space station in Earth’s orbit, but something goes very wrong. Tornadoes begin to touch down en masse and wipe away the landscape, blizzards freeze people in their path, and tidal waves engulf cities.

The film’s synopsis on IMDb says:

“When catastrophic climate change endangers Earth’s very survival, world governments unite and create the Dutch Boy Program: a world wide net of satellites, surrounding the planet, that are armed with geoengineering technologies designed to stave off the natural disasters. After successfully protecting the planet for two years, something is starting to go wrong. Two estranged brothers are tasked with solving the program’s malfunction before a world wide Geostorm can engulf the planet.”

On top of world-ending storms and the general destruction of humanity that makes The Day After Tomorrow look like a pleasant spring day, there’s supposedly also a plot to assassinate the president that somehow fits into all this. It seems Geostorm will be one extreme after another.