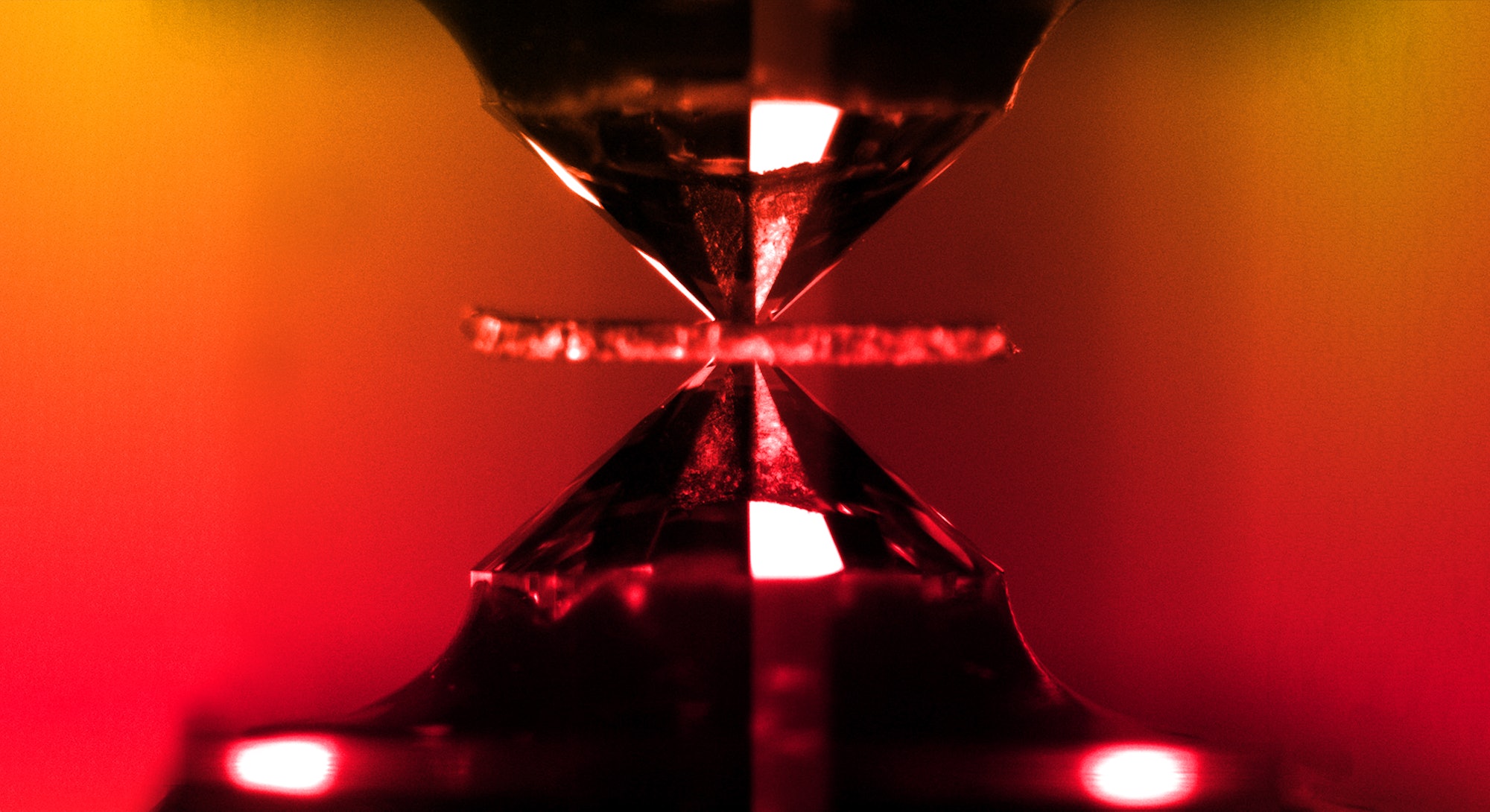 A few weeks ago, inside a Massachusetts lab, a tiny speck of silver reflected lights and made headlines around the world: metallic hydrogen, a long-theorized state of matter, had finally been crushed into existence between diamond anvils. The synthesis, which occurred at extraordinary pressures, turned an elemental gas into a glimmering solid and — after the study was promptly published and publicized by Science — catapulted Harvard physicist Isaac Silvera into the talk of the very small town that is high-pressure physics.

Not everyone had nice things to say.

Twenty-eight days after the paper was published, the sample of metallic hydrogen vanished. Silvera, an affable, spectacled laboratory veteran who had worked doggedly on metallic hydrogen for 45 years, expressed disappointment, speculating that his precious sample had gotten lost or simply vaporized back into gas.

The five other major players in the field had an alternative theory: Fraud.

To understand the nature of this accusation, it’s important to understand the setting and stakes of the conflict arising around metallic hydrogen. The experimentalists that have spent their lives coercing hydrogen into a metallic state form a sort of intellectual gentlemen’s club, but civility has lately declined. The handsome, sharp-tongued University of Edinburgh physicist Eugene Gregoryanz, Ph.D., tells Inverse that Silvera is like a “used car salesman.” The older, milder-tempered Max Planck Institute of Chemistry physicist Mikhail Eremets, Ph.D., calls Silvera’s study an “unbelievably bad experiment.” These scientists have always acknowledged each other as competitors, and now, as advancements in technology have placed metallic hydrogen within their reach, their rivalry has taken a very bitter turn.

In theory, the first scientist to synthesize metallic hydrogen will slingshot to the forefront of the rocket fuel revolution. Silvera claims the high-energy substance will “revolutionize rocketry” and admits that NASA provides some of his funding for that reason. It’s unlikely that the Princeton University theoretical physicists Eugene Wigner and Hillard Bell Huntington — who in 1935 published a seminal study predicting that hydrogen, which phase-shifts in almost countless ways, could be arranged to form a metallic lattice — thought their paper would start a race of this intensity. The finish line? A metal created by an intense pressure found only at the Earth’s core. The benefit? Depends on who you ask. While there were clear motivations for acquiring the first atomic bomb or the patent for alternating current, the practical benefits to being the first to synthesize metallic hydrogen are unknown and potentially nonexistent, despite Silvera’s insistence on its usefulness in space travel.

This claim seems to be as speculative as the original Wigner-Huntington theory. Silvera’s sample comprised only one-billionth of a liter and existed only under extreme laboratory conditions. As Silvera’s team found out when they tried to move their sample, doing so causes metallic hydrogen to vanish. “I think he’s a lunatic,” Gregoryanz scoffs, saying this is a sprint toward “pure knowledge” alone.

In his paper, Silvera claimed that, at 495 gigapascals — nearly 5 million times air pressure at sea level — he overcame hydrogen’s desire to scatter, coercing the atoms into the metallic array that Wigner and Huntington envisioned. As proof of his discovery, he offered the scientific community a measure of its reflectivity — one defining characteristic of metals — but not much else. This, to Eremets and Gregoryanz, was sloppy science. “Reflection is not necessarily metallic hydrogen,” Eremets tells Inverse in his thick, Belarussian accent. He pointed out that the diamonds used to compress hydrogen atoms are coated with aluminum oxide and that Silvera did not rule out the possibility that this thin layer produced the metallic shine. Furthermore, hydrogen in dielectric and semiconductor phases is also reflective, but not metallic.

“We are scientists,” Eremets says. “This should be experimentally well established.”

He and Gregoryanz, both prominent physicists, categorize it as a poorly designed experiment, and the fact that it managed to get through the peer review process at Science makes Gregoryanz furious. Though he was not part of the process, his conversations with others in the field led him to devise an operating theory about what went down.

“It was handled by a junior editor at Science, who had experience in high pressure, and it’s amazing that he went and sent it to the referees,” he says. Referees are a scientist’s peers, selected by a journal’s editorial board, who review research articles before they are published.

“Only one referee was an experimentalist, who said that this was a horror. Two others were theoreticians, and they just said, ‘Oh, great!’”, Gregoryanz continues. He reiterates that the pool of hydrogen and high-pressure specialists is tiny and that they alone comprise the only referees in the world qualified to evaluate this research. Gregoryanz claims to be “absolutely 100 percent sure” that Silvera requested these experimentalists not referee his paper. He says he only knew one of the referees, who told him he’d suggested the paper be disregarded.

Gregoryanz says he understands why big-name journals want to “create stories,” but he’s concerned they settled for fiction. An official spokesperson from Science defended the journal’s refereeing process, saying that all articles that require in-depth review “receive appropriate scrutiny by an expert.”

Silvera confronts the criticism being leveled at him by suggesting that it is just a part of working in his field. “They don’t want you to get ahead,” he says of his fellow researchers, noting that such conflicts have arisen previously. He does not, however, play the victim. In 2016, he posted a heated commentary to arXiv, a Reddit-like forum constituting the high-pressure field’s sparring grounds, blasting Gregoryanz, who reported seeing an unprecedented phase of dense hydrogen. The harsh feedback, Silvera says, is necessary but has probably gone too far. “It keeps you up at night,” he says, “But I’d like to see a friendly community.”

Silvera refers to both Eremets and Paul Loubeyre, another high-pressure bigwig at France’s Atomic Energy Commission, as “old friends,” but he thinks Gregoryanz should cool it with the commentaries and “focus on experiments.” In response to the specific scientific critiques, he keeps it short and sweet: “I wouldn’t have published if I wasn’t sure.”

Does it matter whether Silvera’s certainty is justified? Regardless of whether his metallic hydrogen sample actually existed, he, like Gregoryanz, Eremets, and the other members of this tense community, will continue to ply the ubiquitous atom into ever-novel forms, even after metallic hydrogen is inevitably synthesized. Hydrogen will never cease to resist manipulation, just as scientists will never stop trying to manipulate it. That’s what makes it so important.

Perhaps this is where high-pressure physicists can finally agree. They acknowledge that hydrogen is a fundamental building block of the universe and that they’re honor-bound by their profession to understand it. Silvera does it because he loves hydrogen’s “simple and straightforward” nature, just as Gregoryanz is driven by a desire to “squeeze” simple systems.

“Simply there are in science, deep milestones, deep goals, not necessarily practically immediately applicable,” Eremets says matter-of-factly. The reward for achieving these milestones is knowledge, but whether it is immediately useful to anyone is beside the point. The importance of metallic hydrogen is imbued upon it by the scientists who use it to upstage one another. Without them, metallic hydrogen is just another silver speck in a sleepless lab.