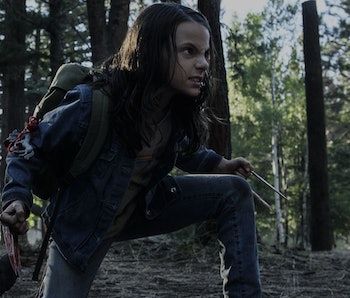 It may be Wolverine’s final hour in James Mangold’s Logan, but the world isn’t completely without mutants. While most have been wiped out in what is known as the “Westchester Incident,” a paramilitary laboratory called Alkali Transigen has extracted DNA from mutants to “birth” new ones, including one named Laura (Dafne Keen), dubbed “X-23.”

Laura was “created” from a sample of Logan’s DNA, and it’s possible that her “labmates” were also sampled from some well-known X-Men. When their powers become obvious in the film, it’s pretty easy to guess at where they came from.

Rictor, Bobby, Jamaica, Rebecca, and Delilah: These are the names of the other kids Laura was with at Transigen, and she repeats their names to the ire of Logan. There’s a lot more of the kids than those five, but the film doesn’t take the time to clearly identify each of them. Still, Logan still gives a peek at some of their powers as they try to stop Donald Pierce, the Reavers, and Transigen’s Wolverine clone X-24.

One kid, Bobby, has ice powers similar to Bobby Drake, aka Iceman. (And he can’t be Iceman, because Iceman was already played by Shawn Ashmore.) Another mutant — his name unknown — wields Pyro’s fire powers. Joey, a telekinetic mutant, may or may not be Jean Grey’s nephew Joey Bailey.

Though not among the children, Christopher Bradley, who appeared in X-Men Origins: Wolverine played by Dominic Monaghan and went by the name Bolt in the comics, had his DNA extracted by Transigen. His name can be seen for a hot second in the shaky footage captured by Gabriela before she escaped with Laura. Blink and you’ll miss it.

Then, there’s Rictor. He appears in Logan leading the kids up north to Canada. True to his name, Rictor can release seismic energy and even does so a couple times at the end of the film. In the comics, Rictor — created by Louise and Walt Simonson for X-Fractor #17 in 1987 — was a member of the New Mutants and the X-Force in Rob Liefeld and Fabian Nicieza’s run in both New Mutants and in the launch of X-Force in the early ‘90s.