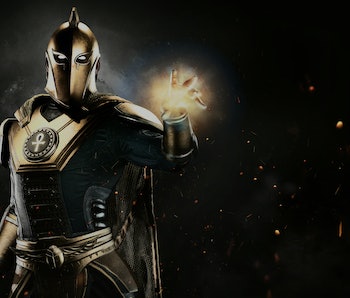 NetherRealm Studios and Warner Bros brought Injustice 2 to GDC in San Francisco this week, debuting the first chapter of the game’s Story Mode for critics. The player, as Batman, faces off against Cyborg, Wonder Woman, Superman, and Damien Wayne’s Robin, all of whom have decided they want to brawl.

Though the sequel to Injustice: Gods Among Us boasts a renewed conflict between Superman and Batman, the real draw is the boundless, customizable gear available for everybody from Black Canary to Swamp Thing. That gear, WB tells Inverse, is all either mined from obscure comics or from the creative minds of comic book and gaming artists asked to experiment for the game.

Joining the lineup of DC heroes this time around is a new formidable opponent, Dr. Fate. Among other boss moves, Fate can suck his opponent into his own chest and set traps along the area of play. The improved gameplay also makes the epic opponent match-ups in Story Mode feel realistic. The designers at NetherRealm tell Inverse that they have been carefully protecting the pre-fight exchanges between characters and keeping them out of trailers, because each conversation relays so many details about Story’s Mode plot.

As we play through again in Story Mode’s summary chapter, Joker had killed Lois Lane and hundreds of Metropolis citizens with a brainwashing plot. In response, Superman kills Joker, irrevocably changing the entire Justice League’s worldview. Only Batman still believes that superheroes shouldn’t kill, and in the first chapter’s final moments, his son Damien defects to Superman’s side, slicing a criminal’s throat in Arkham.