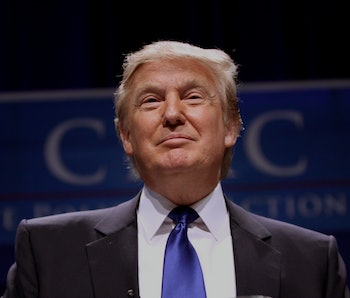 Self-driving cars are going to need new infrastructure if they want to conquer American roads, and Donald Trump says he has an answer. During a joint address to Congress, President Trump said he would ask the legislature to approve a $1 trillion investment plan, financed with a combination of public and private capital, to revitalize the country’s roads, bridges, airports and more. Trump hasn’t announced any details of what that plan would entail, or specifically mentioned how it would be worked into his budget. But one way or another, autonomous cars will have a huge impact on the nation’s roads — which haven’t changed much in decades.

“Crumbling infrastructure will be replaced with new roads, bridges, tunnels, airports and railways gleaming across our beautiful land,” Trump said during his speech.

Autonomous cars will need better roads, simply because there’ll be more vehicles using the roads. These machines will use 5G cellular connectivity to speak with each other, communicating collision data and maps. The growing network will mean smarter cars on the road avoiding each other with incredibly sharp accuracy.

Avoiding other cars is going to be huge, because when everyone takes their hands off the wheel, self-driving systems will be able to cram a whole lot more vehicles on the road. Research from Princeton in 2014 showed that, although the number of cars on the road may initially dip as over-cautious programming means autonomous vehicles drive safer than necessary, traffic will drastically increase as self-driving cars reach peak penetration in the marketplace and develop efficient technology for moving together.

After the year 2035, autonomous vehicles are expected to account for 75 percent of vehicles on the freeway, and will be 35 percent more efficient than their non-autonomous precursors. And self-driving cars will be used more than traditional vehicles: Princeton estimates that vehicle miles traveled per capita will increase by 35 percent because autonomous vehicles will be so simple and convenient to call up. Combine this with a general increase in population, and you end up with a lot more stress on the roads as more cars log more miles and carry more people.

“Another Republican President, Dwight D. Eisenhower, initiated the last truly great national infrastructure program —- the building of the interstate highway system,” Trump said in his speech to a joint session of Congress on Wednesday. “The time has come for a new program of national rebuilding.”

Eisenhower, influenced by his time spent on Germany’s autobahns during the war, signed into law the Federal Aid Highway Act of 1956. This approved a $25 billion (over $225 billion in 2017 dollars) infrastructure plan over a 10 year period, to develop the national interstate highway system and build 41,000 miles of highway across the country.

Trump claims that his plan will lead to “millions” of jobs. It’s not the first time he’s spoken about his plan - a list of national security projects provided by his transition team to the National Governor’s Association (NGA) last month showed that there are 50 projects under consideration. Some of the projects being considered include a Dallas-Houston bullet train and an upgrade to Interstate 95 in North Carolina.

“This effort will be guided by two core principles: Buy American, and Hire American,” Trump said.

Trump’s plan could turn out to be the major shift in thinking that autonomous vehicles need to succeed. But as the plan has yet to be approved by Congress, there’s still time to go before we get finer details of which projects will receive funding.