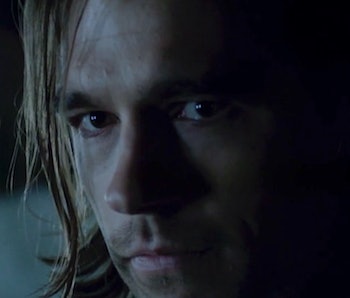 Prior to their big smackdown with the Beast earlier in the season, Quentin, Alice, Penny, and Margo all got matching magical tramp-stamp tattoos, each which contain secret spirits called cacodemons. It ominously seemed like these tats would prove useful in that fateful, future battle, but there’s a twist: The cacodemons, Quentin’s especially, now have a very different purpose.

Spoilers ahead for The Magicians Episode 6, “The Cock Barrens.”

Quentin spent most of this week’s hour trying to figure out how to bring Alice’s ghost out of its niffin-world status. She’s been haunting Quentin pretty hardcore since her “death” after fighting the Beast, and that came to a head during a memorial service at her parents’ house when Alice’s niffin form led Quentin on a spirited chase to some secret books. Quentin and Alice’s dad team-up to try to draw her out of the spirit world. But, there’s a catch, because Alice isn’t really in the spirit world. Alice’s spirit is actually connected to Quentin.

Turns out he didn’t actually kill her when he fired off his cacodemon in a desperate attempt to stop the rampaging niffin from going after his friends after besting the Beast. Instead, Alice somehow joined with the spirit of the cacodemon in his back. Alice is living inside of Quentin, meaning, the tattoo that Quentin got, while he was drunk, is literally coming back to haunt him.

Meanwhile, Margo and Eliot are dealing with the giant war that might be possibly brewing in Fillory, while Penny searches for moss to fix his reattached hands. Pretty standard magic stuff, really. Back on Earth, though, Julia and Kady are continuing their quest to figure out all the ways they can destroy Reynard and deal with Julia’s unborn demon-baby.

In tracking down the only other woman who was ever able to banish Reynard, Julia also stumbles upon a new plot device. Turns out, she’s not the first person Reynard has gotten pregnant. Reynard’s other child, it turns out, has already been born and is out there in the world. He’s apparently “a good man” who has no idea his father is an evil magical villain. Start placing your bets now as to which regular — and “good” — character on The Magicians will be revealed to actually be the son of Reynard. Though Quentin Coldwater didn’t have any secret, magical Darth Vadery dad in the books, there’s no reason it won’t happen in the show.

The Magicians airs on Wednesday nights on SyFy.