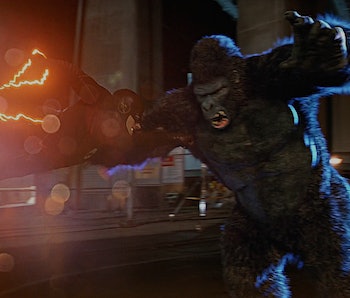 On this week’s episode of The Flash, Gorilla Grodd busts the barrier between worlds and attacks Flash on his home turf. He immediately takes over Joe’s body and almost has him shoot himself through the skull, and though Barry saves Joe, he’s left wondering how to stop Grodd for good. He talks it over with Iris and Harry, whining that Green Arrow gets to kill people and stay a superhero, but every member of Team Flash says the same thing: “You don’t kill, Barry. It’s not who you are.” When Grodd goes low and tries to shoot Barry’s adoptive father, Barry pulls a Michelle Obama and goes high.

Unfortunately, Grodd’s next move is to use another human to arm a bunch of nuclear missiles. When Barry figures the situation out, he spends 40 seconds of airtime rapidly punching different numbers into a keypad, eventually disarming the weapons. Then, an army of armored super gorillas runs down an empty street in Central City — no one in the city notices or thinks this is weird, apparently — and the three speedsters are tossed around like garbage. Wally, Jesse Quick, and Barry gets their butts handed to them, but Cisco and Gypsy show up with a smarter solution: They’ve grabbed Solovar from another reality. Since Barry can’t kill Grodd, this other superpowered, angry, and armored psychic Gorilla can do it, and no one on Team Flash has to feel bad about it!

But, of course, that doesn’t work either. Barry begs Solovar to spare Grodd’s life and Solovar, bafflingly, concedes. Team Flash sends the angry Gorillas back to Gorilla City, and Grodd is banished from their world entirely.

What’s left to unpack when the Gorilla City arc ends is the nature of Barry’s superheroism. Grant Gustin told Entertainment Weekly today, “No matter what choice he makes, he’s set up this domino effect that just being the Flash has created this world of problems for him for the rest of his life.” The joke among fans, of course, is that Barry can’t for the life of him stop messing up the timeline. He may be an idiot that way, but as The Flash’s Executive Producer Andrew Kreisberg has pointed out, Barry only makes huge mistakes in trying to save others.

At the end of this week’s Grodd incident, Harry tells Barry, “There’s always another way.” Though Harry is referring to outsmarting Grodd rather than killing him, Barry hears “another way” and decides to propose to Iris. That marriage proposal, coupled with the freaky metal monster Wally sees at Belly Burger in the episode’s final moments, signifies that Team Flash will move on quickly from this two-part Grodd emergency.

The Flash airs Tuesdays on The CW at 8 p.m. EST.