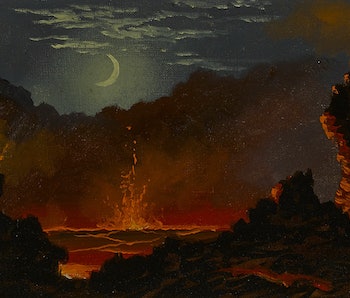 Volcanoes, with their fiery lava and tons of ash, can be deadly, but they could also be the key to life on distant planets. New research suggests that gases spewed out by extraterrestrial volcanoes might allow life to survive on worlds that are much farther away from their host stars than we previously thought was possible.

The further a planet is away from its star, the more likely it is to be a cold, icy wasteland, naturally. Any life (assuming it’s possible for life to exist at all) would almost certainly be buried deep in the ice, making it nearly impossible for Earth scientists to detect. Unless, as a team of Cornell astronomers put forth in a new paper, lots of volcanic activity created a greenhouse effect and warmed the surface enough for life to thrive up top.

“You get a nice big warming effect from volcanic hydrogen, which is sustainable as long as the volcanoes are intense enough,” said Ramses Ramirez, a research associate at Cornell’s Carl Sagan Institute and the lead author of the study.

A slew of eruptions means we could find life on a planet 30 to 60 percent further away than what we previously thought the upper limits of the habitable zone could be.

“We just increased the width of the habitable zone by about half, adding a lot more planets to our ‘search here’ target list,” said Ramirez.

To put this into perspective, the habitable zone in our solar system extends just past Mars’s orbit. A volcanically rich and warm planet like Ramirez describes could extend that habitable zone out to the midst of the asteroid belt between Mars and Jupiter — 2.4 times the distance between the Earth and sun.

Volcanic hydrogen would also make a planet’s atmosphere more noticeable, making it easier for scientists to study it and possibly detect subtle signs of life light-years away.

The implications of this discovery are already apparent. NASA revealed that it had discovered seven Earth-sized planets orbiting around Trappist-1, a small dwarf star 40 light-years away from Earth. Three of these planets are right within the system’s habitable zone. However, if Trappist-1h, the planet furthest away from the sun, is a hotbed of volcanic activity, it could mean there are actually four planets in the habitable zone. Lisa Kaltenegger, the director of the Carl Sagan Institute, cautions that it “uncertainties with the orbit of the outermost Trappist-1 planet” might still rule it out. It’s too early to tell.

Still, her team’s findings are yet another bit of evidence that life in the universe (or at least places where life could survive) aren’t quite as rare as we thought. “Where we thought you would only find icy wastelands, planets can be nice and warm – as long as volcanoes are in view,” Kaltenegger said.