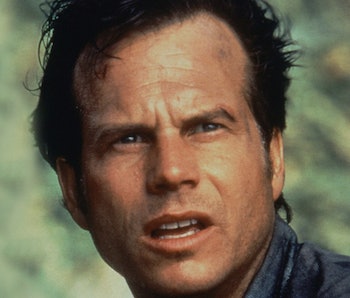 On Saturday, Bill Paxton died at the age of 61. His family says he died as a result of complications during surgery. The actor is remembered for his roles in films such as Aliens, Predator 2, and The Terminator, but his career spanned beyond science fiction too. Paxton played dramatic roles in Titanic, Apollo 13, and Twister.

It’s for this last role that tornado tracking and forecasting site U.S. Tornadoes has chosen to commemorate Paxton, who played retired storm chaser Bill Harding in the 1996 film. In Twister, Harding is a weatherman who got out of the storm-chasing game. But he’s drawn back in to help test his advanced tornado tracking technology, putting himself directly in the path of the twisters.

In this photo, Paxton as Harding stands with his back to the camera, gazing off across the plains of Wakita, Oklahoma, the setting of Twister. In the distance swirls a tornado. The special effects in Twister were astounding at the time, though the film feels a bit quaint now.

Nonetheless, this pensive photograph of Paxton seems a fitting tribute to the actor who will be remembered for playing characters who remained confident even when they got in over their heads.

Harding didn’t meet the same end as some of Paxton’s other characters, though, and this photo evokes the character’s thoughtful words:

“You gotta move on. Stop living in the past, and look what you got right in front of you.”

More like this
Science
Sep. 23, 2022
Artemis I Moon launch may be delayed again — and NASA can't do anything about it
By Doris Elín Urrutia
Science
Oct. 1, 2022
5 lessons from the most iconic climate documentary of all time
By Tara Yarlagadda
Entertainment
Oct. 1, 2022
How Rings of Power stunt coordinator made a more “organic” Helm's Deep
By Eric Francisco
Related Tags
Share: