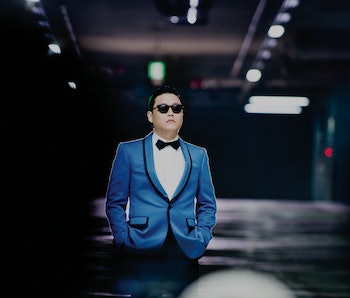 Synchronicity may be the one constant in pop culture, which seems to change drastically over time yet feels uniform at any given moment. Auto-tune is everywhere. Chance the Rapper is everywhere. Every movie trailer incorporates the same squelching bass. This is neither coincidence or inevitability. This is how the marketplace of ideas transforms creativity into currency. And, as The Atlantic Senior Economics Writer Derek Thompson argues in his new book Hit Makers: The Science of Popularity in an Age of Distraction, the system can be understood.

In a sense, his book is an attempt to grapple with the dynamics of a unique economy. In a different sense, it’s a rebellion against broadly accepted but unsupported theories about what makes something popular. Thompson suggests that humans are primed to like what’s familiar and that virality isn’t driven by cleverness as much as we might hope. Inverse spoke to Thompson about what gets big and what that actually means.

Internet culture seems to equate “going viral” with being popular. Is that true?

People who have studied this have found that viral hits are mostly broadcast. When you say that something has gone “viral” on Facebook, and if you see two of your friends have shared it, you default to saying, “That’s gone viral.” But it’s often the case that the article was broadcast on the front page of a widely read website or from a Twitter user with tens of thousands of followers. There’s almost always a broadcast distribution method somewhere in that information cascade: Somewhere between it being published and the time you found it, it was broadcasted.

The viral myth is sticky for two reasons. One is that producers want to think that quality is destiny; you make the best stuff, and it goes huge. But that’s not true. Distribution is more important than content when it comes to popularity. And second, for audiences, I think we associate virality with veracity. If I’ve seen it in a lot of places on Twitter or Facebook, it’s probably true. But we need to diffuse ourselves of that notion as well. Just because something has been shared by several of our friends doesn’t make it true. They might be getting it from the same faulty source.

And that gives way to fake news. How has the internet made it increasingly viral and popular?

I think we’ve discovered that a lot of fake news has been broadcasted, that it comes from Facebook pages with enormous numbers of followers.

In the art history world, there’s this idea of provenance: If you discover a painting, figure out where it came from, who bought it before the current owner, who bought it before that, and so on, you figure out if it’s real or not. I think we could use the principle of provenance for media literacy. Just because you’ve seen two of your friends link to an article, don’t believe it just because you trust your friends. Figure out where that article is broadcasted from.

It’s easy to say, “I don’t trust that because I read it on Fox News,” but we shouldn’t trust anything. We should seek out provenance.

That’s a lot of effort.

Understanding the truth takes a lot of effort, I suppose.

I noticed you talk about early adopters of technology. Are there any common traits among them? Do they have good taste in terms of being able to identify things that are going to be popular?

No, they are not special people. I think there are people who have a commercial interest in convincing you that they have special tastes, but I see no evidence that such magical influences exist.

So, you don’t believe in the concept of influencers because it’s a marketing concept?

I’m aware of no academic paper that’s ever proved that influencers, ordinary people with extraordinary taste and influence, exist … except for celebrities or people who already have large audiences.

I know you didn’t want to comment in the book about the popularity of Donald Trump and his presidency, but I was wondering if you could comment on the science of his popularity and how popularity plays out in modern election cycles? How does the idea of someone being familiar help make a candidate appealing to a group of people?

I think with regards to Donald Trump, he was shocking to liberal elites, but his message was in fact very familiar to a lot of his supporters. Conservative talk radio and conservative media had been pro-nativism, had been skeptical of immigration, had been skeptical of elites and science, had demonized Democrats and insisted compromise was unattainable. Donald Trump mainstreamed that.

And he’s popularized the movement to question climate change. People who questioned climate change were considered quacks, but it seems that all of a sudden, there’s a sense of community and a broad range of support. Is there an explanation for the rise in this popularity as well?

I think if you are exposed for the first time to a new idea in a new subject area, then you’re likely to consider it fluent and often true. I think that a lot of people who believe climate change is a hoax heard it from news media first who told them it was a hoax. There are elementary textbooks now that say that evolution is a hoax. There are celebrity talk shows that have said that global warming is a hoax. You see that truth comes from familiarity. What’s the media a person is surrounded by? If they are saying a certain thing over and over again, it becomes extremely believable.

Is that the dark side of virality?

There is a dark side to all of this. Basically, I think an enormous number of human biases come from a bias for the familiar. Let’s talk about the biases of white people: We know that white people who grow up with little exposure to minorities except for news and entertainment that might paint them [minorities] in a negative light, we know these people are more anti-minority than individuals who grow up in multicultural neighborhoods. No one is born to hate black people or only like white people. Prejudice has to be taught. One of its instructors is media, and media makes things go viral.

You seem to suggest that we’ve evolved to seek the familiar. Will we (or should we) move away ever from seeking the familiar and making it popular?

I think that both our instinct for discovery and our instinct for familiarity are innate. There’s a line in the first chapter of the book where I say that this is a conservation thing, that if you recognize an animal or plant, it means that it hasn’t killed you yet and it’s safe. But at the same time, as hunter-gatherers walked out of Africa, into the Middle East, through Europe then Asia, all the way to Patagonia, we’ve dealt with the unknown. We’ve always been explorers. We’ve always had an instinct for discovery. It’s not that I think familiarity is the only thing, that we exist in a vacuum. We just like new things that remind us of old things.