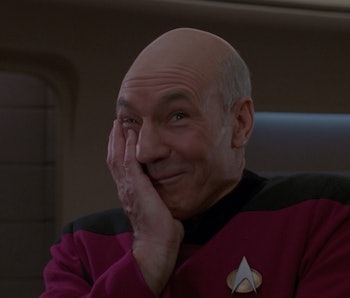 Patrick Stewart and Hugh Jackman are currently in the middle of press junkets for their Wolverine film Logan, and fans are pestering them with questions about future Marvel movies. In an on-camera interview this week, a fan asked Stewart whether Professor X would ever meet Deadpool in a movie. At first, Stewart jokes about Hugh Jackman’s influence in Marvel movies — “Just set it up, Hugh!” — but then the two actors stumble over revealing big news. “I thought you were going to announce something else,” Jackman answers, smiling, and Stewart hesitates. Both actors laugh nervously, turning back to the camera before changing the subject. Pretty sneaky…

Though both Professor X and Wolverine die in Logan, the film is set in 2029, long after the spot in the Marvel timeline occupied by Deadpool. That means Professor X could reasonably appear in an X-Men film set decades before Logan, especially since Ryan Reynolds is now attached to at least two more Deadpool films, and at least one X-Force movie. In Marvel comics, the X-Force mutants are a black ops warfare team that addresses violent threats that Professor X often has trouble dealing with.

Because of Xavier’s kind heart, it would be fascinating to see him have to grapple with the tactics of people like Wade Wilson and Cable. Though Patrick Stewart certainly didn’t confirm anything on that front, the answer to that fan’s question seems to be something other than “no.”

Watch the full reaction from Jackman and Stewart before, and decide for yourself.