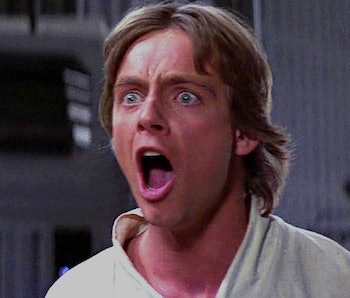 Han Solo is rumored to be going back to being a cold-blooded killer, but if you look at the news closely, he probably still fired his blaster in self-defense. Though diehard fans are desperate for a theatrical rerelease of the classic Star Wars trilogy minus the computer generated tampering of the 1997-1998 “special editions” — like Han’s extra laser blasts — it looks like the latest revived rumors or a theatrical original cut should be thrown in the trash compactor.

On Thursday, Jason Ward, the editor-in-chief of the fansite Making Star Wars published a piece in which he asserted that “we firmly believe the unaltered original edits of the 1977, 1980, and 1983 cuts of the original Star Wars Trilogy will officially be re-released soon.” Naturally, everyone who has been frustrated with George Lucas’s “updating” of the films celebrated. But not so fast. Not only is this a rumor, but it’s a very old one, and it looks like it’s already been shot down.

Hidalgo would have no reason to shoot down this rumor unless it was a fake The likelihood that he’s pretending like it’s fake only to make the surprise of a such a rerelease more exciting is optimistic but very unlikely.

Still, fans might not be totally out of luck for a theatrical rerelease of A New Hope in 4K this year. Rogue One director Gareth Edwards seemed to confirm the existence of a 4K version of A New Hope. But, whether that spruced-up version of the 1977 film contains the 1997 alterations is unclear. If it was viewed at Lucasfilm, it seems like even the rumored 4K A New Hope is probably the officially sanctioned “special edition.” That means the bounty hunter Greedo is still getting off an extra shot before being zapped to death forever.