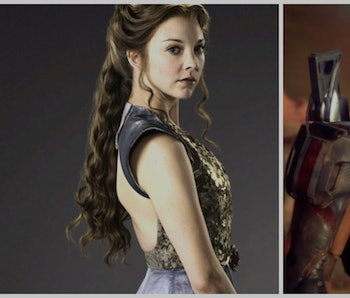 You probably know Natalie Dormer as Game of Thrones’ Margaery Tyrell, but soon you’ll be seeing her in a brand new light — as Asari doctor Lexi T’Perro aboard the Tempest. Lexi provides psychological and medical aid for the Tempest crew while they’re exploring the Andromeda galaxy.

“She’s got some experience and wisdom under her belt. In that way, she’s able to advise the player,” Dormer said in an introductory video from Bioware. “She isn’t without emotion or compassion. She tries to walk the line of the professional doctor, but sometimes she tips over it.”

In writing the character, BioWare wanted Lexi to be a resource to help players gauge their progress, but she also needed to be a memorable character that players would enjoy approaching. Andromeda Creative Director Mac Walters explains, “Lexi is this sort of character whose whole job is to sort of analyze the people around her and care for the people around her, but at the same time, of course, she’s got her own things that she’s dealing with.”

BioWare is known for its nuanced characters, from those joining the player’s party to the various NPCs that populate your ship or the city you’re visiting. Walters also notes that Lexi is the first character Ryder meets after coming out of 600-year stasis at the beginning of the game. She’s a constant companion from that point on.

Lexi T’Perro is likely to have a large presence in Mass Effect: Andromeda, and we’ll be learning more about her when the game launches on March 21.