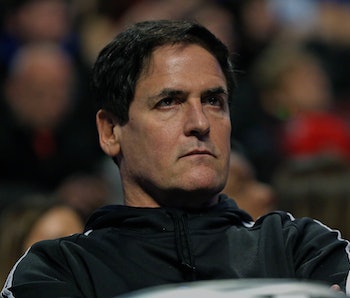 If you listen to the experts, there’s one thing certain about the future of work: more jobs will be automated. Beyond that, the looming issue of mass unemployment has confounded the highest-profile thinkers and business leaders of our time. But as many public figures start to come around (or decide to pander) to the idea of a universal basic income, Mark Cuban has emerged to question the idea that a basic income would be good for the poor.

Cuban’s view comes from a series of tweets in response to a recent Medium article on the subject. The editorial summarizes some recent comments from people like Bill Gates, Stephen Hawking, and Elon Musk, all to the effect that society better get ready to implement a basic income for all, or else!

“Automation is going to cause unemployment and we need to prepare for it,” Cuban pronounced.

One of his Twitter followers hit him with this question: “You are for [universal basic income] as the best response, right?”

Cuban replied curtly, “No. I think it’s one of the worst possible responses.” When pressed with comparisons to Namibia, Liberia, India, and Kenya, Cuban replied “I’ve spent a lot of time looking at it. I don’t see those countries as being apples to apples.”

With an incoming wave of automated jobs and hungry, angry Americans, the argument goes that the choice is between paying people to live and suffering another Great Depression.

This seems like an odd sort of argument to make, since it really has nothing to do with mass unemployment at all. The social safety net, no matter how well-funded or organized, is not designed to provide for the needs of a large fraction of the population in perpetuity, which is what basic income is all about. Cuban agrees that large-scale unemployment is coming, and his main argument against preparing a system for that day is that we should instead invest in… what? MedicAid? Unemployment insurance? Cuban doesn’t say, but insists that the problem “can be fixed.”

This claim is fundamentally out of step with the reasons people want basic income in the first place. When speaking to Business Insider, Cuban made it even more clear that he doesn’t understand the problems faced by most non-millionaires: “What’s unclear to me,” he said, “Will people be net-happier, or are we just so dependent on our jobs for meaning and fulfillment?”

It seems like Cuban isn’t sure he’s in favor of paying single mothers enough to make sure they can live and provide for their families, because he doesn’t know if they’ll still get the fulfillment they once derived from re-charging the batteries of a stock-bot at an Amazon grocery store.

To switch so blithely from discussing the human realities of a failing economy to airy new-management ideas about fulfillment through work would be laughably naive, if it weren’t indicative of the mindset of a huge proportion of influencers like Cuban.

There are very good reasons to be wary of universal basic income — not the least of which being that there’s no real proof it actually works, as Cuban also points out. But the core of his argument is the same flawed, largely unexamined canard that underlies so much of the faux-populism of this new class of public billionaires: that they have the slightest idea of what the world is actually like. The one and only way in which these CEOs can claim to speak as experts is via their insights into business and economics — their social and cultural insights are worth less than those of just about any other user on Twitter.

Maybe basic income is a bad idea, and should be opposed. If that is the case, however, the argument that proves it will take one or both of two forms: evidence that it doesn’t work, or evidence that it isn’t needed.

The simple fact is that people like Cuban will be deeply affected by any large-scale change to the current economic system, and so their opinions on any such change should be seen as inherently self-interested — even if basic income won’t become an actual problem for at least a few decades. Probably.