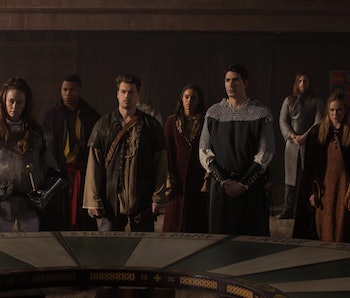 Normally, the Legends of Tomorrow stick to visiting actual historical periods and events. However, in Tuesday’s especially, uh, legendary episode, the crew of the Waverider traveled to King Arthur’s mythical Camelot in search of a fragment of the Spear of Destiny. While they were there, they learned what really happened to the Justice Society of America. In fact, without the JSA, there wouldn’t even be a Camelot.

Before this episode, everyone thought that the WWII-era superheroes had all disappeared during a 1956 mission to Leipzig. That’s everyone except for Amaya, who became a Legend, and Obsidian, who wasn’t allowed on that mission due to his homosexuality. It’s a tragic end for an iconic team — except that’s not what really happened.

Tuesday’s episode kicks off with the still evil Rip Hunter traveling to Detroit in the year 3000 and interrogating a somewhat familiar-looking scientist about the location of a spear fragment. The two seem to know each other, but it’s only after Rip kills the man and the Legends discover his body that we realize that he was the JSA member Dr. Midnight.

Later, when the gang travels to medieval England, Amaya sees another familiar face — the wizard Merlin is actually Stargirl. What really happened, Stargirl explains, is that none other than Rip Hunter accompanied the team during that mission in Leipzig. After they found the spear, Rip had them divide it into pieces, tasking the members of the JSA with guarding their fragment at some point in history. Stargirl was sent to this time of kings and knights, and she’s responsible for creating Camelot.

Although things were touch and go for a bit there, the Legends are able to save the day — and Camelot — after a pretty cool battle. Sure, you could tell that there weren’t all that many knights involved, and Ray’s fanatic devotion to the allure and nobility of the Round Table was a little sudden, but it was all worth it for his lightsaber stunts. (And, come on — Ray’s fight with Damien Darhk at the end of the episode was totally an homage to Kylo Ren and Rey’s snowy duel at the end of The Force Awakens.)

Undoubtedly, though, the most important thing the Legends did in Camelot was recover Rip, although he’s still very evil (and very much in control of Gideon, as the closing moments of the episode ominously show). We’ll find out next week if the Legends fall apart just like King Arthur’s court did in the myths — but as this hour showed, Sara inadvertently got that downfall starting by playing the role of Sir Lancelot and making out with the queen.