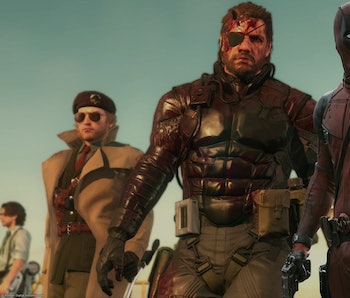 Marvel and Fox surpassed expectations last year with Deadpool, an R-rated superhero movie with a mild budget compared to contemporaries like Batman v Superman. Now, in 2017, the Merc with a Mouth’s influence continues to run deep in genre pictures, because now even the director of Metal Gear Solid thinks “the Deadpool route” is looking feasible.

While on the press tour for Kong: Skull Island, director Jordan Vogt-Roberts talked about his next film Metal Gear Solid, based on the futuristic sci-fi/spy video games from Hideo Kojima and Konami. Vogt-Roberts cited two recent comic book hits, Deadpool and Logan (coming in March) as templates for a sci-fi movie that isn’t easily accessible on the surface. Like Deadpool, Vogt-Roberts thinks a modest budget and an R-rating is ideal for Metal Gear Solid.

“I want to make the version of the movie that is most true to what it needs to be,” Vogt-Roberts told Collider, “so if that is a Deadpool or Logan route where you go with a smaller budget and you’re able to make it R, great.” Vogt-Roberts also didn’t rule out a bigger, more commercial-friendly PG-13 direction. “If you need to blow it out more and really get that bigger budget and go PG-13, I think it could exist in both avenues.”

Vogt-Roberts added that he’s still hammering out the story and recently met with Hideo Kojima, the “one voice” of Metal Gear Solid for decades until Kojima’s controversial exit from gaming publisher Konami in 2015. “I think nailing that part is far more important … than thinking about the rating at this point,” the director said, “because right now we’re just trying to get the best version of it.”

Kong: Skull Island will be released on March 10.