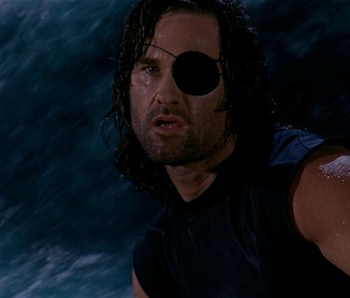 Satire often works best when its message is masked by absurdity. The meaning is still in there, but it’s coded in dystopian futures and alien invasions. Such was the case in the best work of filmmaker John Carpenter, whose movies are now suddenly more relevant than ever.

Movies such as Prince of Darkness, They Live, and Escape from L.A. may seem on the surface like action-horror farce. Look a little deeper, and Carpenter’s prophetic films, made in the ‘80s and early ‘90s, reveal more about the current state of politics than he could have ever imagined when he made them.

Here’s a quick rundown of some of the ways that Carpenter’s films were ahead of their time.

5. Escape from L.A. and Political Demagogues

The less-loved sequel to Escape from New York still manages to trade genre quirks for legitimate social satire. Kurt Russell’s Snake Plissken returns to once again save the president and his family, but this time the tone is even angrier.

Following a moment of political upheaval, a newly installed president expels and walls-off people he finds insufficiently American. He espouses his fiery rhetoric directly to his people with broadcast updates and new mandates. There is no order, and he leads by his own ever-changing whims.

4. The Spread of Paranoia in The Thing

Carpenter’s remake of The Thing was derided as way too much of a downer when it was released in 1982, and well, it’s still a less-than-happy film. But in hindsight, we can see that its perceptive portrayal of paranoia was spot-on.

The movie uses the framework of a group of scientists trying to root out a shapeshifting alien while all cooped up in a remote Antarctic research station as a pressure cooker of suspense. But it resonates most with simple ideas that constantly mutate just like its alien antagonist. Who is your friend? Who is your enemy? How can we really know the truth beyond our own perceptions at this very moment? How can we make sense of such an impossible situation? It asks those questions for us to ponder.

3. The Impending Doom of Mass Communication in Prince of Darkness

Thanks to super HD technology and virtual reality, watching something on a TV or headset is now almost as real as literally experiencing it. But what happens when broadcasts become self-fulfilling prophecies of doom?

Carpenter’s Prince of Darkness is perhaps his most out-there creation. Strangely enough, it’s based on the filmmaker’s interest in the science of anti-matter and posits a sentient liquid found in a church basement as the corporeal embodiment of Satan. But that’s not how the film relates to today.

Here’s where the movie is applicable: When a team of scientists tasked with researching the material all start having a recurring vision of an ominous television broadcast, Prince of Darkness becomes a biting look at how modern communication will probably be the way we all get to witness the apocalypse.

2. Assault on Precinct 13 and the Embattled State of Law Enforcement

It’s tough to be a cop in America. Upholding the law is among the most honorable professions out there, but incidents involving egregious abuses of power has caused a controversial and gradual shift in the perception of law enforcement for some.

In all its genre glory, Carpenter’s Assault on Precinct 13 is anything but serious. It plays out like a zombie Western set in late-70s South Central Los Angeles. An African-American police sergeant and a white convict lead a band of civilians and criminals to defend a dilapidated L.A. precinct against a faceless army of ravenous gang members. It’s cheesy, yes, but its narrative informs how shaky relations between the public, prisoners, and everyday cops could be smoothed over on a personal level.

1. They Live and Questioning Your Own Reality

There’s been a lot said about gaslighting in America as of late. Partisan cable networks and politicians often rattle off falsities — or “alternative facts” — that makes us question what truths, facts, and reality even are anymore. If people can’t understand the truth, what do they even know?

They Live, Carpenter’s scathing satire about unfettered capitalism, can be read any number of ways, beyond its primary anti-Reagan themes. But in the current American political climate, Rowdy Roddy Piper’s tumble down the rabbit hole, where he learns that the world is filled with an omnipotent extraterrestrial force, somehow gives audiences a new sense of empathy for his everyman character. As drifter John Nada, Piper uncovers a reality that most people can’t even perceive, and in turn he has to prove his sanity by convincing others of the truth. There’s nothing alternative about that.